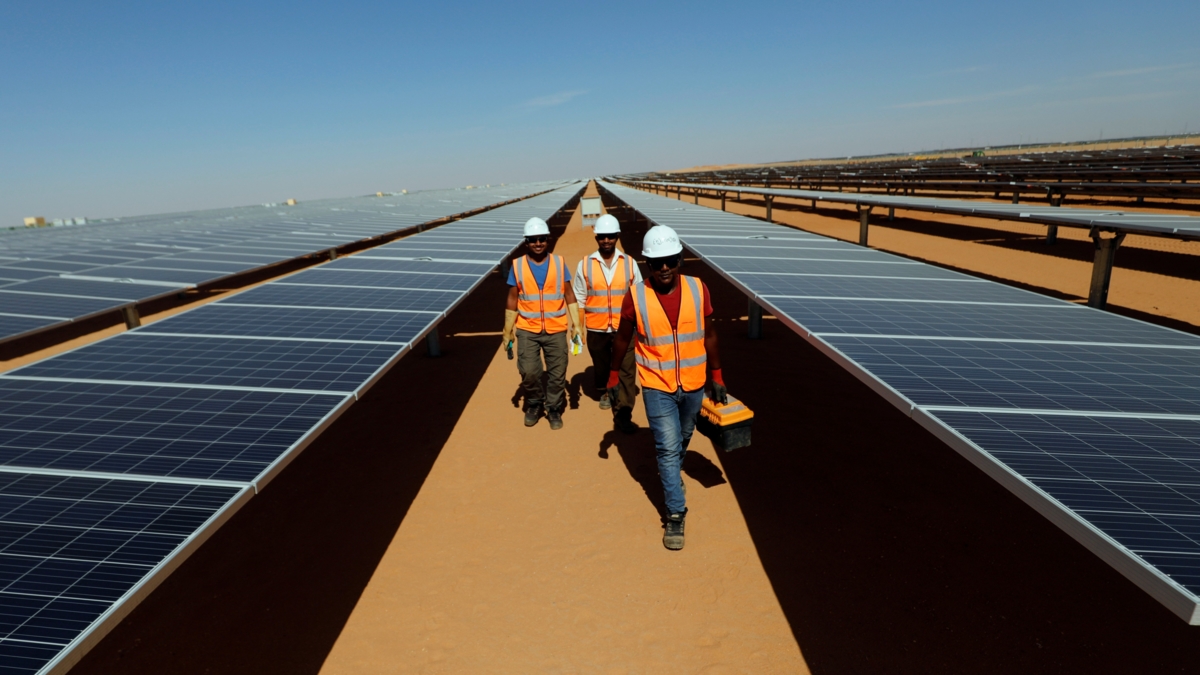 A MORE PEACEFUL WORLD? ‘Since geopolitical power will be more evenly distributed with more renewables, many countries will no longer have leverages over other countries. This could lead to democratisation in some countries. And we know the theory of democratic peace, according to which democracies do not start war with other democracies,’ says Indra Øverland, Research Professor (NUPI) and co-author of a recently published meta study on renewables and geopolitics. The image shows workers between photovoltaic panels at the Benban plant in Aswan, Egypt.

How the green transition will lead to a more peaceful world

The green transition will undoubtedly affect geopolitics. But how? NUPI researchers have taken a systematic look at 204 publications in the first meta-review on the field of renewable energy and geopolitics.

Will the world become more secure if renewable energy is adopted on a large scale? Can electricity transmission be used as a foreign policy instrument or weapon similar to how oil and gas resources have been used in the past? Will renewable energy leaders such as China, Denmark, Germany and the UK strengthen their positions in world affairs?

These are some of the crucial questions for academics studying which implications the rise of renewable energy sources may entail for geopolitics.

Hindering global warming from rising above 1.5C will require reaching 80% zero-emissions energy by 2030 and 100% by 2050, and much of this should be achieved through the increased use of renewable energy. This, in turn, inspires a steadily growing literature on a range of questions concerning the geopolitical consequences of the transition to renewable energy.

Senior Research Fellow Roman Vakulchuk and Research Professor Indra Øverland, who is the coordinator of NUPI's Centre for Energy Research, have been studying geopolitical issues tied to renewable energy for several years. A project carried out jointly by NUPI, Harvard University and Columbia University back in 2017 further triggered their interest, leading them to conduct the first thorough meta review on the topic together with Assistant Professor Daniel Scholten (Delft University of Technology).

The researchers have reviewed, systematised and aggregated the existing research on the geopolitical consequences of the transition to renewable energy, presented in the open access article ‘Renewable energy and geopolitics: A review’, which was published in Renewable and Sustainable Energy Reviews this April.

‘One of our main findings is that renewables may reduce the risk of large violent conflicts but cause more small-scale conflicts. Many of the works we have examined share this view,’ explains Roman Vakulchuk.

However, as with most topics subjected to academic scrutiny, this one generates debate.

‘We can distinguish between two camps: the “renewed conflict” camp and the “reduced conflict” camp. The first holds that renewables will not change the extent and frequency of energy conflicts and that they will just come in new forms. By contrast, people in the second camp think that renewable energy will increase energy independence and thereby reduce the level of conflict in the world,’ says Vakulchuk.

One of the positive effects Vakulchuk and Øverland themselves suggest from the green transition is a more democratic world:

‘Since geopolitical power will be more evenly distributed with more renewables, many countries will no longer have leverages over other countries. This could lead to democratisation in some countries. And we know the theory of democratic peace, according to which democracies do not start war with other democracies,’ says Øverland.

Accordingly, this should enhance international cooperation and strengthen regionalisation.

‘Thus, the effects on international relations are likely to be positive, making the “geopolitics of energy” less conflictual.’

However, issues related to the use of renewable energy as a foreign policy “weapon” are also raised by scholars in the field.

‘Some scholars argue it can be used, others disagree. So far this has rarely been the case in practice. But one thing is clear, renewable energy should lessen dependence between the countries making the issue of energy exports and imports less relevant. What could potentially be a risk if some countries monopolise the production of renewable energy technologies and then use them in their foreign policy is that they sell it to friends and cut supplies to foes,’ says Vakulchuk.

Geopolitics of renewable energy differ from that of oil and gas

Commenting on the findings relevant to the academic world, the authors state that they found a lack of systematic empirical, theoretical and analytical frameworks to study the phenomenon.

‘Sometimes we see scholars resorting to the use of old frameworks applied to study the geopolitics of oil and gas. Maybe by inertia or maybe because no new analytical frameworks for renewables have been developed yet. Based on our study, we see that the geopolitics of renewables differs from that of oil and gas in many ways, says Øverland, referring to one of the tables from their article:

‘The main difference is the fear of resource scarcity which does not apply to renewables as much as it does to oil and gas. We also see that oil and gas markets revolve around issues of demand and supply, exports and imports. But for renewable energy markets the critical issues are storage, intermittency and how well infrastructure is managed. So we need new analytical approaches and frameworks to better understand the geopolitics of renewables. And this is one of our main recommendations for future research’ says Vakulchuk

The geopolitics of renewable energy - not a new topic

Their article reviews 204 publications and ended up 15,000 words long.

‘It is so long that it can send even the most dedicated reader to sleep,’ says Indra Øverland jokingly, and adds:

‘We believe we covered all the main aspects of this issue area and if someone needs to know what the literature is saying about a specific sub-topic in this field of research, we hope our study can be helpful,’

Despite common belief, studies of renewable energy and geopolitics is not something new.

‘Over the past years, a number of scholars published on this topic and claimed they are breaking new ground and that the “geopolitics of renewables” is an entirely new topic, that hardly anything has been published on it before and that they are among the first to explore it. But we came across publications from all the way back in the 1970 and 1980s,’ says Vakulchuk.

The two authors agree that there is a great need for more review articles and meta-studies in the social sciences.

‘They can help consolidate and move forwards whole fields of research, and they also provide a useful service for other researchers. While they are common in the natural sciences and especially in medicine, they are rarer in social sciences. Without meta-studies, scholars may have a limited overview of a field and then may mistakenly claim that their research is new and ground-breaking,’ Øverland concludes.