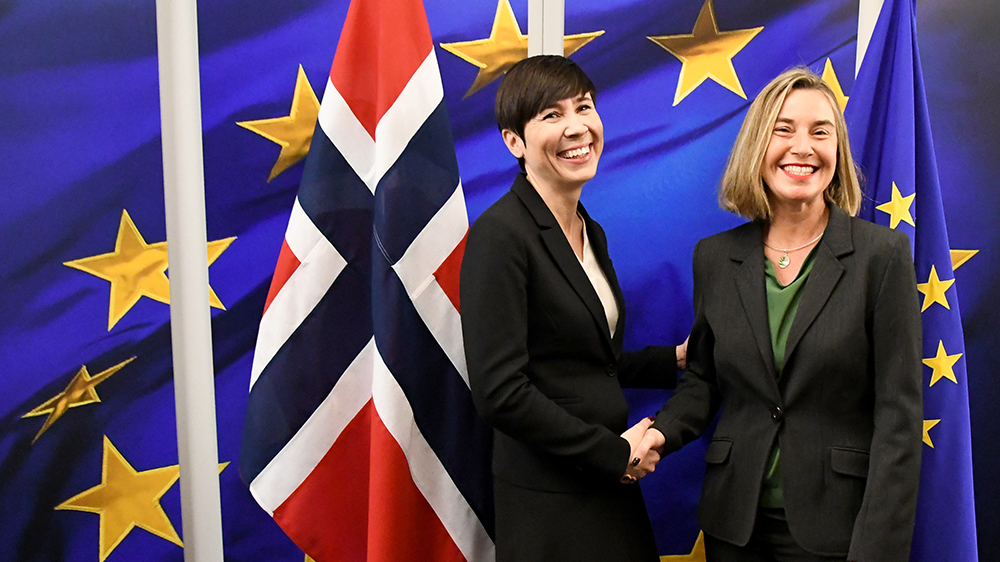 CLOSER COLLABORATION? In a new NUPI report, Research Professor Christophe Hillion takes a closer look at how Norway can enhance its collaboration with the EU on the fields of foreign and security policy. The image shows Norway's Foreign Minister Ine Eriksen Søreide with High Representative of the European Union for Foreign Affairs and Security Policy Federica Mogherini.

Norway’s cooperation with the EU – 4 ways ahead

Can Norway benefit from closer collaboration with the EU on foreign and security policy?

‘Yes’, according to Christophe Hillion, research professor with a long-time interest in topics like the European Union and the European Economic Area (EEA), working at NUPI and the Centre for European Law at the University of Oslo.

In his recently published NUPI report  Hillion takes a closer look at how Norway can enhance its cooperation with the EU in the fast-evolving field of the CFSP –the EU’s Common Foreign and Security Policy.

‘The EU is a lot more than a market’

‘Many in Norway tend to think of Norway’s relationship with the EU as synonymous with the EEA. But the EU today is a lot more than a common market plus a few economic and environmental policies. It is an international actor in the field of security and defence as well’, says Hillion.

Norway and the EU have indeed cooperated in this field for decades. The difference with other frameworks of cooperation, such as the EEA and Schengen agreements, is that cooperation with the EU in foreign policy does not rely on a single international agreement, with elaborate institutional arrangements and dynamic obligations.
‘Rather, Norway joins forces with the EU on a case-by-case basis and often through informal arrangements. This allows for flexibility, but also entails that Norway has very limited channels for exerting influence on EU foreign policy decisions to which it subsequently subscribes. It is to change this state of affairs that the Norwegian government has shown an interest in considering new ways of cooperating with the EU in foreign policy matters,’ explains Hillion.

The report envisages four possible ways of enhancing –his as regards the CFSP:

When the EU took a joint stance against Russia’s annexation of Crimea in 2014, sanctions were the collective tool. Norway aligned with this policy as well, despite its not being a EU member-state.

What does this tell us about Norway’s willingness to cooperate with the EU also in new areas like the CFSP?

‘Norway and the EU join forces because they have a common interest in doing so. Joining forces gives Norway’s foreign policy more impact, while the EU foreign policy initiatives benefits from further support,’ says Hillion, who points out that Norway’s agreeing to the sanctions against Russia was in principle voluntary:

‘It’s not as if Norway were forced to do this. However, it’s getting more and more difficult to make a watertight distinction between market, and foreign policy.’

Further, Hillion notes, this means that, although foreign policy is an area where Norway decides when, where and how to act, there may be pressures to align with certain EU initiatives due to Norway’s deep cooperation with the EU in other fields.

Take sanctions, for example: as part of the sanctions regime against a third state, banks operating in the EU’s single market could be targeted as well:

‘If sanctions applied only to the EU market, and not to the EEA EFTA states, a bank that is subject to EU sanctions might still be able to operate in the EEA through activities in Norway. However, where sanctions relate to the functioning of the single market, Norway will be under pressure to align with them’, he explains.

In its 2018 Strategy towards the EU the Norwegian government underlines its ambition to develop political dialogue and practical cooperation with the EU and to promote more favourable conditions for the Norwegian defence industry.

Global and regional challenges, such as the evolving attitude of the US administration towards transatlantic relations, the volatility of Europe’s neighbourhoods, and Brexit   have also invigorated the appetite for a deeper CFSP cooperation, Hillion notes.

‘For Norway it is smart to act now. The EU and its member-states must be reminded that Norway has a very specific relationship with the EU. Norway should not become a “collateral victim” of the Brexit negotiations.’

Brexit – both an advantage and a drawback?

Hillion goes on to say: ‘One of the points the report emphasizes is that Norway might be in a more privileged position than the UK in the area of CFSP, thanks to its participation in the single market through the EEA. There may be a cost for the UK in terms of CFSP cooperation if they choose to stay outside the single market.’

The downside of Brexit is that, given the UK’s size and influence in Europe, a potential post-Brexit EU–UK security partnership might determine what Norway gets as well.

‘But I would challenge this, because of the legal and institutional features of Norway’s relationship with the EU. These should be taken into consideration when envisaging what type of cooperation Norway can get with the EU in the area of CFSP as well.’

The importance of trust

Hillion sees trust as a major advantage for Norway as regards gaining influence in EU policymaking, also in the field of CFSP:

‘It’s important not to underestimate Norway’s influence on EU decisionmaking, through existing arrangements but also more informally. Years of deep cooperation with the EU have demonstrated that Norway is a close and reliable partner, also in the process of European integration. This trustworthiness has borne fruits in terms of the leverage that Norway can exercise in Brussels’, he concludes.

Want to know more about our work on these topics? Visit our web pages on the EU and Europe, and the NUPI Centre for European Studies.