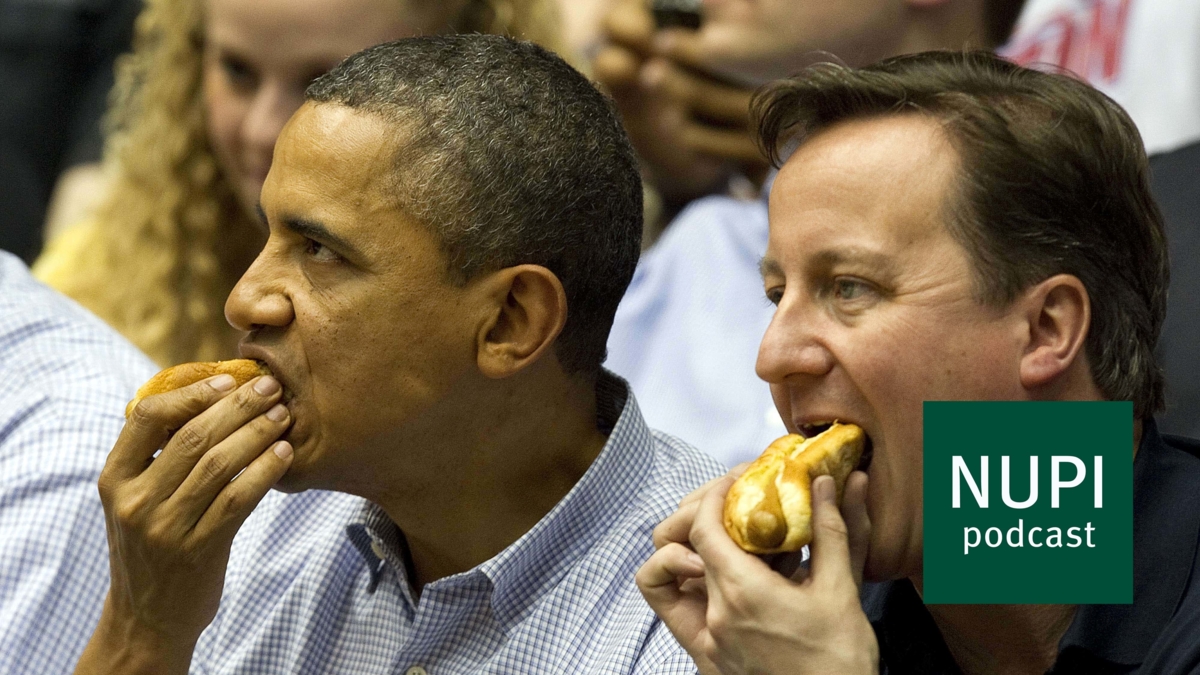 PODCAST: Friendships that move the world

What did two of the world’s most important state leaders – Barack Obama and David Cameron – signal by this image? Senior Research Fellow Kristin Haugevik has examined how relationships between states become ‘special’ in a new book.

Munching on hotdogs and watching a basketball match in Ohio, then US President Barack Obama and UK Prime Minister David Cameron looked like to best friends back in 2012. And maybe that was the whole point of their attending the match: to demonstrate to the world that the UK and USA enjoy a unique kind of friendship.

In a conversation with her colleague, Research Professor Elana Wilson Rowe, in this special-edition episode of NUPI Podcast, Haugevik explains how friendships between states affect global politics:

Both symbolic gestures and tough ‘Realpolitik’

‘When state leaders appear together on the international stage, they all tend to speak of their good relationships. But in my opinion, these special relationships extend beyond this level’, says Haugevik, and explains:

‘On the one hand this involves symbolic signals and practices, like the picture of Obama and Cameron together at that basketball match. But it is also about the many things that go on behind the scenes: frequent meetings, deals that are struck, intelligence that is shared. Over time, the sum of these things are what constitutes a special relationship over time.’

Haugevik has conducted extensive research on relations between the USA and the UK, and the UK and Norway. The UK-US relationship has been subject to continuous media attention and scholary accounts – and was widely seen as important in the UK’s support to the US-led invasion of Iraq in 2003.

By contrast, relations between the UK and Norway have received less attention, yet is manifested in a number of key practices that Haugevik explores in her book.

With Donald Trump as US President and Brexit closing in, there are widespread uncertainties surrounding US and British foreign policy, and future relations between the two countries.

Haugevik will not entirely rule out the possibility that we might one day see Trump and UK Prime Minister Theresa May enjoying hot dogs together at a sports event. However, she points out, not all images are as effective in signalling the ‘special relationship’ as that 2012 basketball scene.

‘When May and Trump joined hands back at their first meeting in Washington DC, this was subject to considerable ridicule in the press. Unlike the image of Obama and Cameron, this manoeuvre simply did not send the message of a close and warm relationship of trust.’

However, it is too early to say whether relations between the two countries have grown colder with Trump and May in office.

‘One of the things my book shows is that, whereas individual state leaders may matter a great deal then and there, over time it simply doesn’t matter so much which political colour the government has or which individuals happen to hold office. It is the massive apparatus behind the leaders that help maintain relations over time, whether through meetings in the UN Security Council, in the EU or NATO, or by way of meetings between individual diplomats in capitals around the world.’