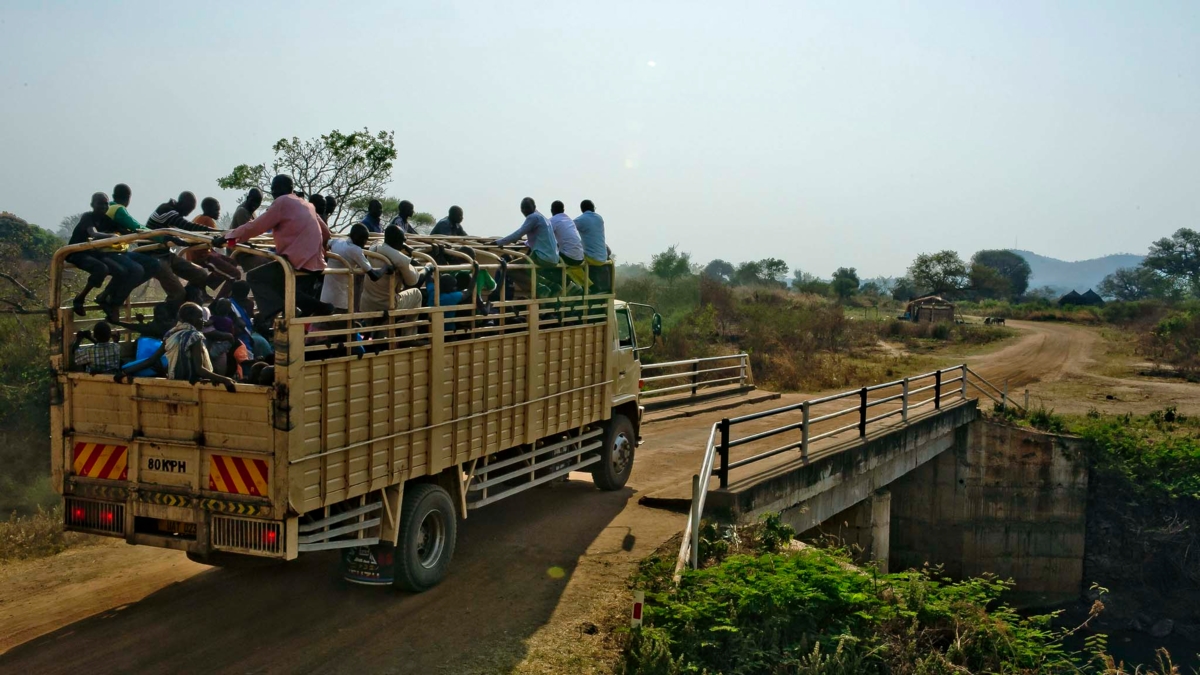 UGANDA: Refugees on their way to Dzaipi.

Refugees across the Mediterranean: causes and consequences

Libya has recently become the most important transit country. Considering the transport of refugees through Libya and across the Mediterranean, a new growth industry has developed in a country without a functioning state.

The numbers of refugees that attempt to cross into Europe by sea are much higher than ever before. As many as 170,000 refugees tried to cross the Mediterranean Sea from the Libyan coast last year.

Many reasons why people leave their homes

Some attempt to escape the conflict zones of Iraq and Syria. Others are running away from authoritarian regimes such as Eritrea, but many simply want a new life in Europe as their current life does not offer many social mobility prospects.

This reality that we are witnessing is not just a temporary phenomenon but a situation we will face for a long time coming. There are many reasons for this current circumstance. The conflicts that produce refugees are not going to end anytime soon and regimes, such as in Eritrea, have proven to have a large capacity of self-preservation. In addition, demographic factors and climate change issues also plays an important role. The Middle East and Africa have the most youthful populations in modern history and these same areas have the most exposure to increased climatic variability threats.

What this means is that traditional livelihoods becomes less viable and increasingly more people ‘struggle’ to control even scarcer resources. If these states and the international community could react to this issue in a concerted and meaningful manner, fewer people would seek to leave. However, as these states are mostly irrelevant and at times harmful to people’s livelihood, plus the haphazard and under-funded international response, the hope of a life in Europe becomes more and more attractive. Some are therefore willing to face life threatening risks in order to improve their lives.

What can be done?

Specifically in travelling from the Sahel and West Africa to Europe, people make the journey through the desert to the Libyan coast where the danger of crossing the sea into Europe is not seen as the highest risk of this journey. We have to help people in such dire circumstances however there is an obvious dilemma here. As more people are rescued from the sea, even more travelers will see this route as within the limits of risk to personal security thus creating more demand for this type of transportation. The question is therefore what kind of alternatives does Europe actually have?

Unfortunately, the nature of this situation does not have a simple nor efficient solution. We are left with a set of alternatives that are far from optimal and if implemented could lead to a series of new challenges and ethical dilemmas.

One solution previously discussed is to go after the ‘traffickers’ and target the boats before they are filled with refugees. This is easier said than done. How could you tell when an old and empty cargo ship or fishing boat is about to be used for trafficking refugees? This could be possible if a better organized criminal syndicate was behind the operations, however this is not the case.

The various operations of transporting refugees across the sea are ‘organised’ through ad hoc collaborations between different networks. They join together for one operation before splitting up again. Furthermore, as this is demand-driven market and a new growth industry in a country without a state, a limited military operation could manage the removal of a ‘trafficker’ or two. However considering the demand and need, new ways to transport these refugees will emerge. Thus, the further Europe embarks on a military approach the more hazardous it will become for refugees, even if they are not a military target themselves.

Another approach discussed is to establish refugee camps on the other side of the Mediterranean Sea. This is problematic however, because such camps will have to be established in Libya and thus be protected from external attacks by European military forces. Whereas internally such camps will need a large police force to keep the refugees inside the camp boundaries. By necessity, such camps will become military garrisons that will likely be exposed to attacks from the outside as well as internal rebellions by refugees who will see them as nothing more than prison camps.

We could also make an attempt to rebuild what we helped destroy – the Libyan state. However, as the events after the fall of Gaddafi showed, this will be difficult, costly and take time. There was no state or Libyan nation behind the façade of the Gaddafi state. So when the state fell as quickly as it did, all that was left after the NATO air campaign were a number of militias with no common bond beyond that of removing Gaddafi. With very little common ground to build upon, the situation has not improved in the recent years and has gone from bad to worse. It is therefore impossible to say with any certainty when a new state will emerge and what form it will take.

Simply, there are no quick fixes or immediate solutions to the humanitarian and political crisis that is taking place in the Mediterranean. Europe and the European Union must be prepared for a prolonged refugee crisis. We need to rethink our long-term approach and policies towards the countries and regions that produce these refugees as well as towards European border control and asylum policies.

This text has been published online before at The Broker.