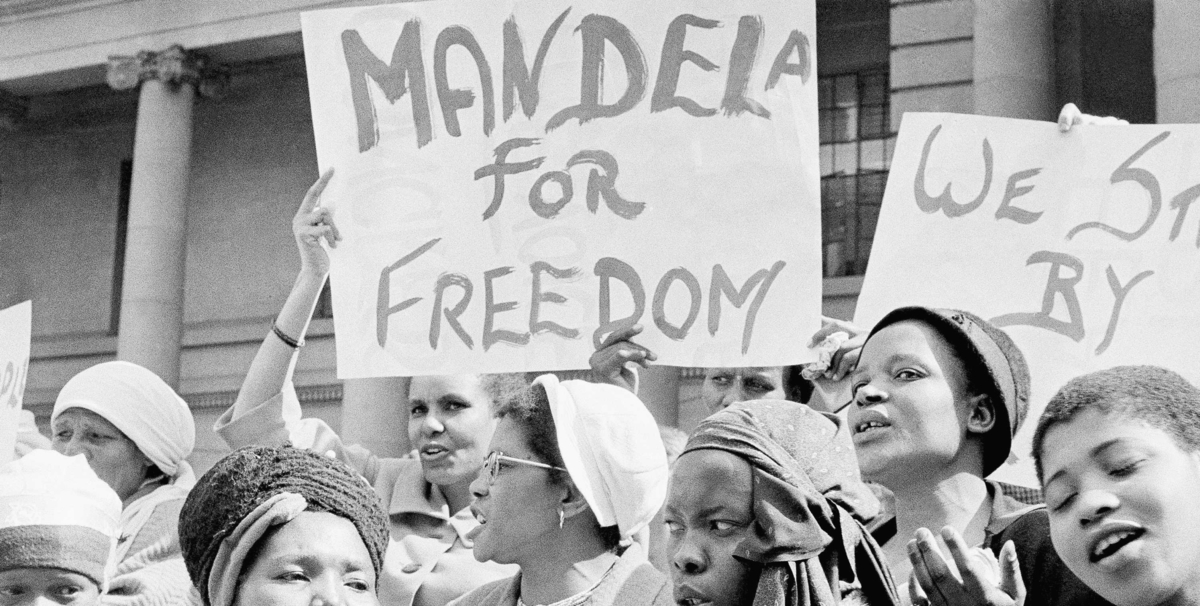 DEMONSTRATING FOR FREEDOM: Women in South Africa demonstrates together with Winnie Mandela for releasing Nelson Mandela in 1962. Among Mandela's important causes were democratic elections and freedom from racial discrimination. Mandela served a 27 year sentence in prison. After his release, he was elected president of South Africa.

‘We need to reflect on what “freedom” means to us’

What does freedom mean? In her new book, NUPI Senior Research Fellow Rita Augestad Knudsen examines the use of this concept within international politics.

November 1917. The First World War had raged for more than three years. In a provocative declaration meant to address the international situation, Russia under the leadership of Vladimir Lenin referred to the concept of self-determination. Many cited this term at the time, but could one really trust the Allied Powers’ commitment to self-determination?

US President Woodrow Wilson felt pressured into formulating a reply to his ideological opponent in the East. But should he make use of the controversial concept – until then associated with Lenin – or not? His Secretary of State said ‘no’. However, in February 1918, Wilson himself used the term ‘self-determination’ in a speech to the US Congress – thereby taking ownership of the concept and ensuring that it became known world-wide.

Wilson and Lenin: Conflicting views on freedom and self-determination

With this story of Wilson and Lenin, Senior Research Fellow Rita Augestad Knudsen begins her new book on self-determination and freedom.

In her book, titled The Fight Over Freedom in 20th- and 21st-Century International Discourse. Moments of ‘Self-determination’ published by Palgrave Macmillan, Augestad Knudsen examines two conflicting ideas of freedom: the liberal-conservative and the radical. She examines how ‘self-determination’ has been invoked at decisive moments from the beginning of the 20th century and up to the present.

'Those who subscribe to the radical idea of freedom have typically held that people who want self-determination should have the right to form their own state, or to affiliate with another state. To them, changing borders is OK. Supporters of the liberal-conservative idea may also support such solutions, but only if this can strengthen peace. If such solutions seem likely to cause conflict, other types of measures, for example minority rights, would be preferred.'

Freedom as equality, or freedom as peace?

The Fight Over Freedom …is based on Augestad Knudsen’s PhD dissertation from the London School of Economics and Political Science. In the book, she uses international discussions on self-determination as a prism for exploring how different ideas of freedom have been expressed internationally. As she points out, since the early 1900s, the discourse on self-determination has also been a struggle between the radical and liberal-conservative ideas of freedom:

'I analyse and categorize ideas of freedom by studying a very limited discourse – that of ‘self-determination’. By analysing this discourse I found there were actually two opposing ideas of freedom competing for domination. In very simplified terms, the radical idea views freedom as basically the same as equality. By contrast, in the liberal-conservative view, freedom is approximately the same as peace.'

The radical idea of freedom has been pushed aside

Augestad Knudsen examines various moments in history where self-determination has played a crucial international role. These include the end and aftermath of the First World War, the formulation of the UN Charter, the debate on the UN General Assembly resolution on de-colonization in 1960, and the International Court of Justice case on Kosovo’s declaration of independence.

‘Each of the two ideas has been important in different moments,’ she explains.

‘But could we say that the liberal-conservative idea has “won”?’

‘Yes, perhaps. However, all these moments have been triggered by someone putting forward the radical idea. But then this radical idea has usually been pushed aside. After Lenin and Wilson, much of the battle between these ideas has revolved around which one should be incorporated in international law.

‘But is enough to say about these two ideas to fill an entire book?’

‘The meaning of the concepts of freedom we use may seem obvious and are usually not reflected upon by either sender or receiver. But I think it’s important to think through what kind of freedom is at stake when the concept is referred to, and which ideas of freedom has been important earlier in history’, Augestad Knudsen says.

‘Freedom is a positive word, but don’t both ideas of freedom entail positive as well as negative aspects them?’

‘The liberal-conservative idea of freedom obviously involves an inclination towards preserving the status quo, and not allowing new groups to speak out against those in power. Meanwhile the radical idea raises questions of exactly how to decide on possible boundary changes and on what grounds. This idea has also often openly supported the use of violence to achieve the desired goals.’

Augestad Knudsen’s message is that it is worthwhile reflecting on what ‘freedom’ means:

'The book has a historical focus – in particular, the past 100 years. But also today, freedom is an idea that often is bandied about, for example by the ‘radical’ right, where the group that one wants freedom for is often very narrowly defined. On the left, ‘freedom’ is often seen as something that is opposed to equality – rather than seeing equality as a form of freedom in itself. The categories have become over-simplified. I hope that my book may contribute to making our concepts of freedom both more clear and more complex. Who ‘owns’ the concept of freedom today? And what type of freedom is being asserted? These are highly relevant questions today.'