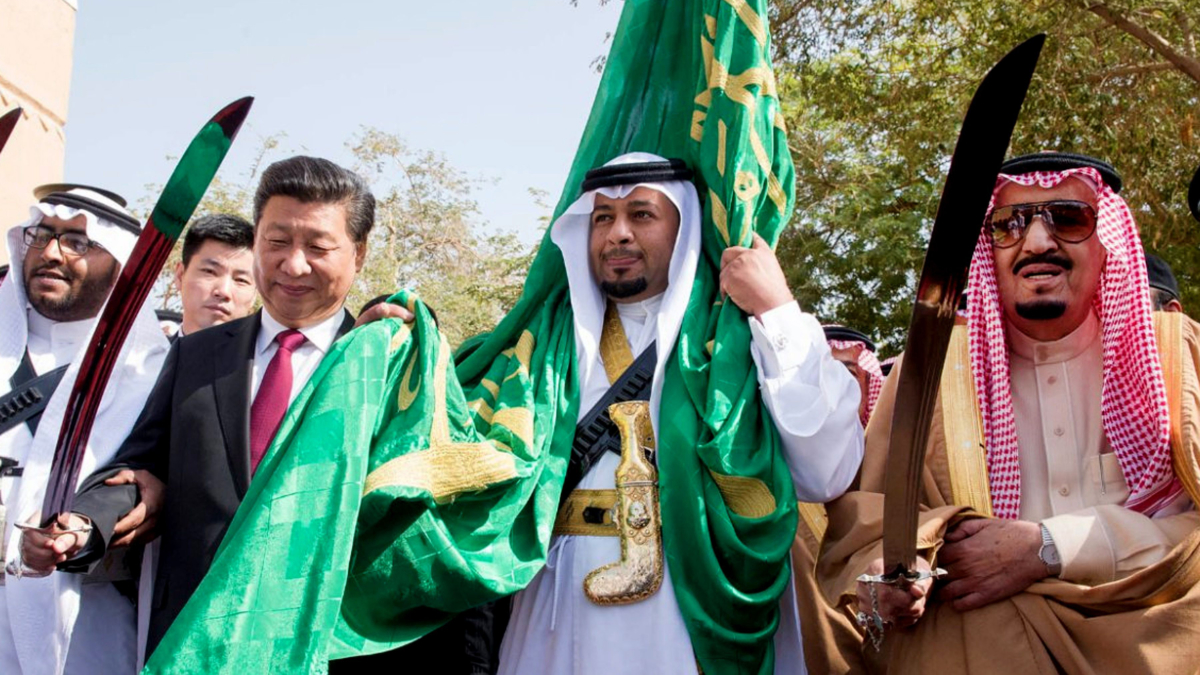 CLOSE TIES: China’s President Xi Jinping meets King Salman bin Abdulaziz of Saudi Arabia. Their two countries have become mutually dependent on one another due to China’s oil import. Here the two heads of state participate in a traditional dance as part of the welcoming ceremony for the Chinese president’s state visit to Riyadh in 2016.

What does China really want in the Middle East?

‘The Middle East is of crucial importance to Beijing because almost half of China’s oil supplies originate there, from Saudi Arabia in particular. Although Beijing is attempting to find additional sources, the Middle East is essential because of China’s huge energy demand. And vice versa: China is important to the Middle East because it is such a major customer’, explains Henrik S. Hiim, Senior Research Fellow at NUPI.

It is against this backdrop that Hiim and Stenslie (Norwegian Defence Intelligence University College) have analysed China’s strategy in the region. Their study was published this November in the renowned journal Survival (Vol. 61, no. 6).

They note that China’s investments in the Middle East also make the two mutually dependent.

‘China is the largest foreign investor in several countries in the region, and investments will probably grow in the future due to the Silk Road Initiative,’ adds Hiim.

Low profile in the Middle East

Whilst the Middle Eastern policy of the USA and its footprint there have been debated for decades, less emphasis has been put on China and the Middle East.

‘The Middle Eastern countries are probably concerned about China, but the Chinese are good at keeping a low profile, as opposed to the USA and Russia, who both participate in military conflicts. The political processes are many, but China isn’t particularly involved in these. Take the Israel–Palestine conflict – China doesn’t interfere there. Beijing does have a policy, but we just don’t hear much about it’, he notes.

And, Hiim continues, that’s exactly how the Chinese want things to be. Let the others do the dirty work, so that they themselves can concentrate on pursuing their own interests.

However, it is evident that Beijing is keenly interested in keeping the region stable, actually more so than is the USA. Problems related to the sea routes in the Middle East, in particular the Strait of Hormuz, connecting the Persian Gulf with the Gulf of Oman, as well as the Bab el-Mandeb, connecting the Red Sea to the Gulf of Aden, could hit Chinese trade and oil imports hard.

China has maintained a low diplomatic profile in conflicts in the Middle East, and as far as possible avoids directly challenging the USA’s position in the region.

‘A key element in China’s strategy is to stay on good terms with all parties in the region. So far, the Chinese have succeeded in maintaining good relations with Iran, Saudi Arabia and Israel – and those three aren’t exactly the best of friends.

‘The war in Iraq is one example. In the UN Security Council, China abstained from voting on the USA’s intervention proposal, but they didn’t put much force into protesting against it either’, Hiim continues.

Thirdly, China doesn’t want a prominent military role in the region. The Chinese Navy is set to establish a stronger presence, but according to Hiim, there is little evidence to suggest that Beijing wants a heavy military footprint on the ground or wishes to build military alliances.

‘They want to stay above the horizon and off at sea. This sends much weaker proactive signals than what has been the case with Washington.’

Lastly: To the extent China wants to employ forceful measures, economic ones are preferred

‘It’s not so easy to see just how they do this, but we can note that more and more countries are dancing to Beijing’s tune because they want to protect trade and secure future investments from China,’ Hiim says.

Chinese realism vs US idealism

Hiim and Stenslie characterize China’s strategy in the Middle East as realism, in stark contrast to the approaches of the West.

‘US Middle East policy has – at least in the past – been heavy on ideology, based on the close relationship with Israel and the promotion of democracy and liberal values.’

Hiim goes on to explain that Beijing, in contrast, has opted for a utility-maximizing policy revolving around a limited number of interests, and with no specific ideological or value-based foundation. ‘You may call it cold-blooded, but they do have their own national interests at heart. Unlike the Americans, they don’t really care what type of regime they’re dealing with.’

‘A prominent Chinese scholar recently stated that there are two mistakes China could make in the future. One would be to start a new cultural revolution. The other would be to engage militarily in locations with no strategic value.’

Here the Afghanistan conflicts come to mind, where the USA has made several mistakes – and at a very high cost.

‘But the Chinese appreciate these mistakes, because for nearly two decades this has ensured that Washington D.C.’s attention hasn’t really reached East Asia. It has also led US foreign and security policy to focus on counter-insurgency, not competition with China. The Americans are attempting to turn this around now, but they are late – and Beijing is eternally grateful for that’, Hiim concludes.