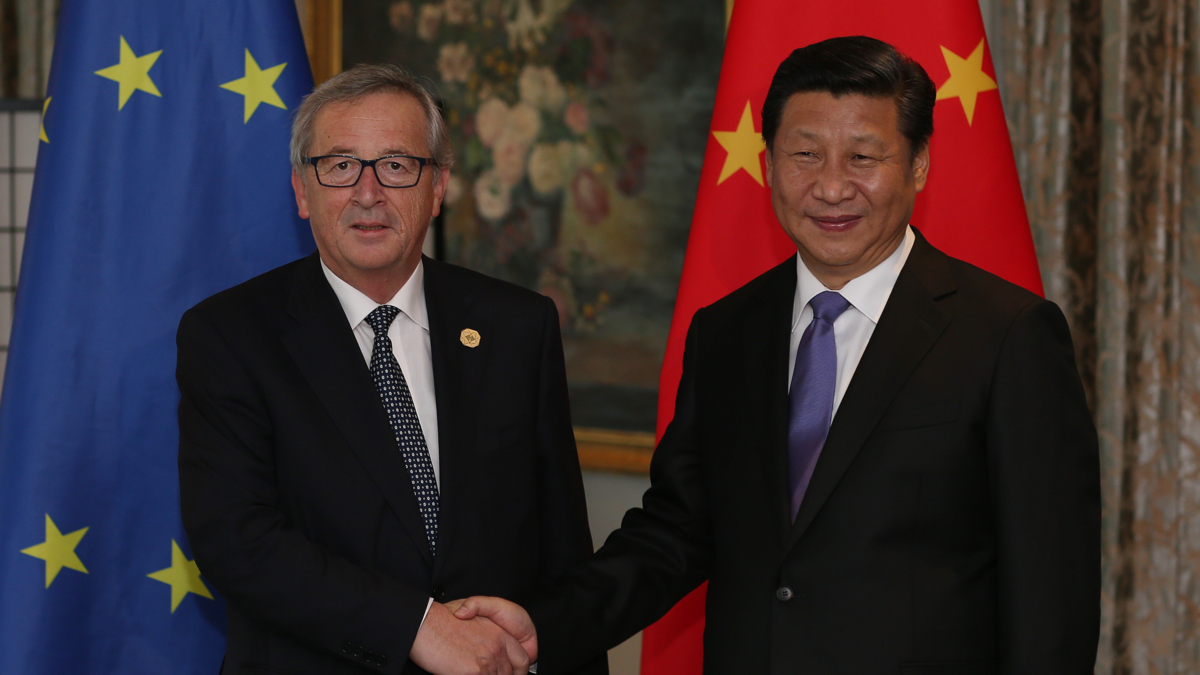 FRAGMENTED: 'In contrast to the United States, the response by the European Union to China's rise and the growing importance of East Asia has been more fragmented,' says NUPI's Asia expert Marc Lanteigne. The image shows Jean-Claude Juncker, President of the European Commission and President of China, Xi Jinping.

What's next for Europe?

How should the EU respond to the American ‘pivot’ – the strategic shift towards the Asia-Pacific?

In 2011, US President Barack Obama declared an American strategic shift towards the Asia-Pacific - what would be known as the pivot to Asia.

In an article recently published by the Brookings Institution, one of the world’s most renowned think tanks, NUPI researchers examine Europe’s policy responses to the US pivot, with comments and responses by Will Moreland and Thomas Wright at Brookings.

‘The “pivot” included the placing of greater US military assets in the Pacific and strengthening security ties with key friends and allies, including Japan, Australia, the Philippines and Vietnam. The policy was an acknowledgement of the growing economic and political importance of the Pacific Rim, as well as concerns about the rise of China and its effects on the overall Asian security milieu,’ explains Dr. Marc Lanteigne, senior research fellow at NUPI.

According to his colleague, Research fellow Bjørnar Sverdrup-Thygeson, the pivot also reflects a strategic reorientation away from the Middle East and Central Asia to the Pacific Rim.

‘The Obama administration considered that more than a decade of wars in Afghanistan and Iraq had served to drawn attention away from the region that holds the most long-term importance for US interests and the international order: the Asia-Pacific,’ he adds.

The writers note that while the US pivot to Asia has been the catalyst for a European pivot, the response has not been coherent among European governments. Instead, they oscillate between four distinct Asia policy options based on: formal cooperation with the United States; coordination with Washington in which European ‘soft power’ complements American leadership; co-existence with an ‘independent’ European position; or competition and radical political realignment, according to the Brookings synopsis.

‘In contrast to the United States, the response by the European Union to China's rise and the growing importance of East Asia has been more fragmented. There is the argument that a coherent regional-level policy towards East Asia is required, but there is the question of whether an EU pivot to Asia should be in cooperation or competition with the US,’ explains Dr. Lanteigne, adding:

‘Our article argues that a middle ground is best, keeping in mind the limitations of the EU at present as a unified foreign policy actor, especially during a current period of economic uncertainty.

Dr. Lanteigne notes that while many EU members, notably the United Kingdom and Denmark, have pursued enhanced relations with Beijing, there has yet to be a Union-level response either to China's rise or to other pressing policy and security issues in Asia.

‘This needs to be dealt with in the short term given the growing number of cross-regional policy issues at present. At the same time, there needs to be more coherent communication between Europe and the United States on Pacific Rim affairs,’ he says.

Sverdrup-Thygeson argues that the EU, to a larger degree, needs to recognize the Transatlantic factor in its relations to the countries of the Pacific Rim:

‘It is of core importance to Europe to keep the US invested in its continent, and in order to facilitate that, the EU should ensure their relevance, not only by handling problems at Europe's borders, but also by being a relevant actor for the US as they direct their main focus to the Asia Pacific.’

Since the start of the Xi Jinping administration in China, Beijing has embarked on ambitious regime-building exercises, including the joint development of the New Development Bank (also known as the Bank of BRICS) and the Asian Infrastructure Investment Bank (AIIB). On a larger scale, China is seeking to build 'Belt and Road' trade routes which would connect China and key European markets.

‘Many of these projects have included single European governments, but there has been little in the way of an EU response to these new organizations. The question of how to address China, while also building stronger links with other East Asian actors, is becoming more pressing,’ notes Dr. Lanteigne.

‘The uncoordinated last-minute dash for AIIB membership in 2015, against the will of the White House, poignantly demonstrates the current fragmented European responses to how best to balance the Transatlantic relationship with the new geopolitical realities resulting from China's rise,’ according to Sverdrup-Thygeson.