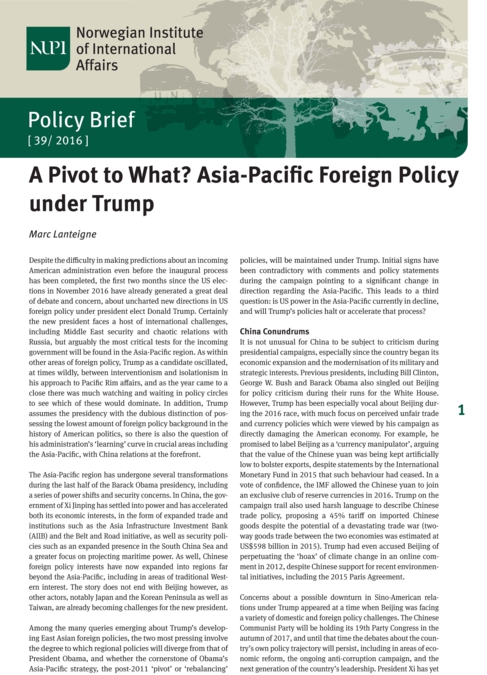 A Pivot to What? Asia-Pacific Foreign Policy under Trump

Despite the difficulty in making predictions about an incoming American administration even before the inaugural process has been completed, the first two months since the US elections in November 2016 have already generated a great deal of debate and concern, about uncharted new directions in US foreign policy under president elect Donald Trump. Certainly the new president faces a host of international challenges,including Middle East security and chaotic relations with Russia, but arguably the most critical tests for the incoming government will be found in the Asia-Pacific region. As within other areas of foreign policy, Trump as a candidate oscillated,at times wildly, between interventionism and isolationism in his approach to Pacific Rim affairs, and as the year came to a close there was much watching and waiting in policy circles to see which of these would dominate. In addition, Trump assumes the presidency with the dubious distinction of possessing the lowest amount of foreign policy background in the history of American politics, so there is also the question of his administration’s ‘learning’ curve in crucial areas including the Asia-Pacific, with China relations at the forefront.