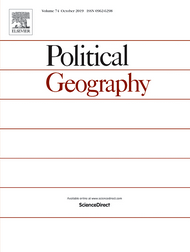 Analyzing Frenemies: An Arctic repertoire of cooperation and rivalry

Intensive transnational cooperation and manifestations of the NATO-Russia security rivalry have endured for over 30 years in the post-Cold War Arctic. Drawing upon the concept of repertoires from the social movement literature, this article seeks to make a conceptual contribution as to how we might better analyse and articulate the simultaneity of these practices and narratives of cooperation and rivalry in the circumpolar region. Repertoires are typically defined as bundles of semi-structured/semi-improvisational practices making up a context-contingent performance (for example, by civil society towards the ‘state’). These repertoires are argued to be created and performed in ‘contentious episodes’, rather than structured by long-term trends or evidenced in single events. Translated to global politics, a repertoires-inspired approach holds promise for privileging an analysis of the tools and performance (and audience) of statecraft in ‘contentious episodes’ above considerations of how different forms of global order or geopolitical narratives structure options for state actors. The emphasis on the performance of statecraft in key episodes, in turn, allows us to consider whether the interplay between the practices of cooperation and rivalry is usefully understood as a collective repertoire of statecraft, as opposed to a messy output of disparate long-term trends ultimately directing actors in the region towards a more cooperative or more competitive form of Arctic regional order. The article opens with two key moments in Arctic politics – the breakup of the Soviet Union and the 2007 Arctic sea ice low. The strong scholarly baseline that these complex moments have garnered illustrates how scholars of Arctic regional politics are already employing an episodic perspective that can be usefully expanded upon and anchored with insights and methods loaned from social movement literature on repertoires. The 18-month period following Russia's annexation of Crimea is then examined in detail as a ‘contentious episode’ with an attending effort to operationalize a repertoires-inspired approach to global politics. The article concludes that a repertoire-inspired approach facilitates systematic consideration of the mixed practices of amity and enmity in circumpolar statecraft over time and comparison to other regions, as well as offers one promising answer to the growing interest in translating the insights of constructivist scholarship into foreign policy strategy.