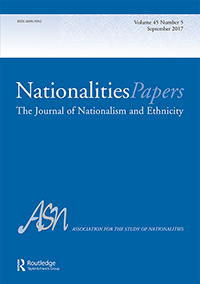 From the symposium: 'The New Russian Nationalism: Imperialism, Ethnicity and Authoritarianism 2000–15 is a timely volume that presents readers with a rich and up-to-date analysis of the content of, contestation over, and consequences of Russian nationalism under Putin. The editors brought together the very top names in the study of Russian nationalism from North America, Europe, and Russia, and the end result is an impressive collection of chapters analyzing issues such as changes and continuity and nuances of public opinion in Russia; the (dis)similarities between historical, early post-Soviet, and most recent debates over Russian national identity; the relationship between growing authoritarianism and the recent ethnification of Russian nationalism; the role played by religion, television, economics; and more.'