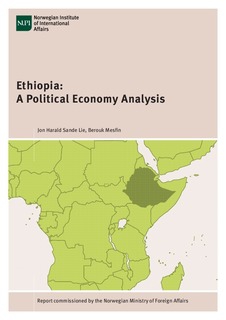 This report provides an overview and analysis of some key issues pertaining to the political economy of Ethiopia in a historical perspective. The continuous rule of the Ethiopian People’s Revolutionary Democratic Front (EPRDF) since 1991 has advanced a revolutionary democracy founded on the idea that the EPRDF itself should be the vanguard party both representing and leading the people. This form of central dirigisme has produced a developmental state with authoritarian features and opaque boundaries between the party and the state system. The strong and assertive party, having its clear vision of the developmental objectives and means, has produced a self-determined state apparatus that seldom yields to internal or international pressure. It has also produced impressive economic results over the last decade and a half, especially in the central and urban areas, and now aspires to become a middle-income country by 2025. Against this economic performance, there are critical concerns regarding democracy, human rights, uneven distribution and growing inequalities. The political space has gradually narrowed since the contentious 2005-elections, and there are currently no opposition parties with parliamentary representation. The invocation of a ten months state of emergency following the popular anti-government protests in 2015 and 2016, is just one expression of how human rights are being truncated, the lack of an open political space and the regime’s authoritarian features. Despite this, international actors maintain their relations to Ethiopia and continue to provide development assistance. This is partly due to the government’s performance in other domestic areas, but also a recognition of Ethiopia’s important regional role in providing stability in the Horn of Africa. The government has known to capitalize on the international actors’ need for a stable partner in the region, which has provided leeway for both its domestic and international affairs. It is thus unlikely that Ethiopia would be challenged by any other regional state or combination of states. Nor is it expected that any of its international partners would challenge Ethiopia, for instance by putting conditions pertaining to domestic political and human rights issues before the concern for regional stability. Any challenges to the regime and political stability are more likely to emerge from within – whether in the form of further popular political unrest, or disagreements within the EPRDF government or its coalition parties.