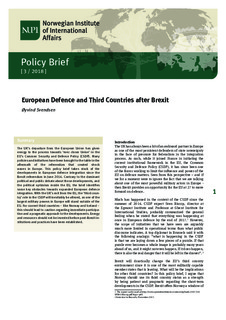 The UK’s departure from the European Union has given energy to the process towards ‘ever closer Union’ in the EU’s Common Security and Defence Policy (CSDP). Many policies and initiatives have been brought to the table in the aftermath of the referendum that created shock waves in Europe. This policy brief takes stock of the developments in European defence integration since the Brexit referendum in June 2016. Contrary to the dominant political and public debate about those developments, and the political optimism inside the EU, the brief identifies some key obstacles towards expanded European defence integration. With the UK’s exit from the EU, the ‘third country’ role in the CSDP will inevitably be altered, as one of the largest military powers in Europe will stand outside of the EU. For current third countries – like Norway and Iceland – this should lead to caution regarding immediate participation and a pragmatic approach to the developments. Energy and resources should not be invested before post-Brexit institutions and practices have been established.