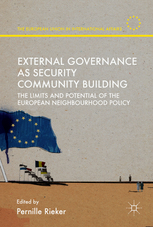 The European Neighbourhood Policy (ENP) was initially intended to create ‘a ring of friends surrounding the Union, from Morocco to Russia and the Black Sea’ (Prodi, 2002). Today, however, the ever-worsening security situation in the region clearly shows that the aim has not been achieved.

With wars in Ukraine, Syria and Libya, the Union’s neighbourhood can therefore better be described as ‘a ring of fire’. Does this means that the policy has failed and that an alternative policy towards the EU’s neighbours is needed? Or should these developments be seen as temporary setbacks caused by external factors beyond EU control? By comparing the EU’s approach to its eastern and southern neighbours, this volume seeks to answer such overarching questions.

The authors find that the EU still has a potential role to play in providing regional security, but that this role also risks being increasingly undermined if it does not increasingly take into account the broader geostrategic realities in both regions.