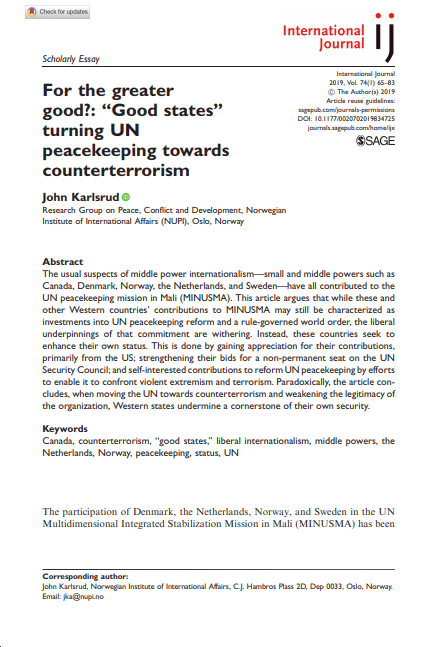 The usual suspects of middle power internationalism—small and middle powers such as Canada, Denmark, Norway, the Netherlands, and Sweden—have all contributed to the UN peacekeeping mission in Mali (MINUSMA). This article argues that while these and other Western countries’ contributions to MINUSMA may still be characterized as investments into UN peacekeeping reform and a rule-governed world order, the liberal underpinnings of that commitment are withering. Instead, these countries seek to enhance their own status. This is done by gaining appreciation for their contributions, primarily from the US; strengthening their bids for a non-permanent seat on the UN Security Council; and self-interested contributions to reformUNpeacekeeping by efforts to enable it to confront violent extremism and terrorism. Paradoxically, the article concludes, when moving the UN towards counterterrorism and weakening the legitimacy of the organization, Western states undermine a cornerstone of their own security.