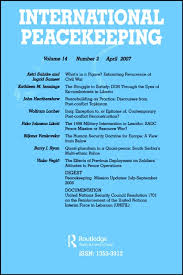 From Liberal Peacebuilding to Stabilization and Counterterrorism

Since the end of the Cold War, international interventions have increasingly been deployed to deal with internal conflict. Liberal peacebuilding has been a guiding concept for many of these interventions, in particular those deployed by the UN. This article argues that liberal peacebuilding is waning in importance, both as a guiding concept and in practice. After long engagements in Afghanistan and the enduring effects of the financial crisis, Western states are shifting their strategy from liberal peacebuilding to stabilization and counterterrorism. In Africa, regional ad hoc coalitions set up to fight terrorists and other armed groups are on the rise, and progressively included in UN peacekeeping operations. To examine these shifts more closely, the article focuses on the crisis in Mali since 2012 and the growing Western security presence in neighbouring Niger. The article concludes that the turn from liberal peacebuilding to stabilization and counterterrorism is likely to be counterproductive, as it will lead to more oppressive governments and more disillusioned people joining the ranks of opposition and terrorist groups, as well as undermine the UN in general and UN peace operations in particular.