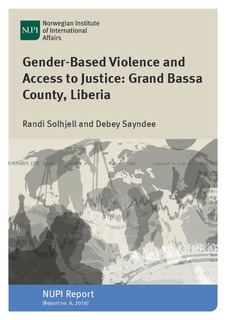 Liberia has a dual justice system: there is a formal court hierarchy under the judiciary (i.e. a statutory justice system), as well asa system of customary courts. In this project, this report examines the issue of gender-based violence (GBV) in relation o these two systems. This report is based on fieldwork in Grand Bassa County, and builds on qualitative data (interviews and focus groups) and quantitative data (survey).

The survey showed that the majority of respondents (96%) have access to forms of local justice, i.e. a justice system that is affordable and nearby. This also corresponds well with our qualitative data. We have identified various challenges as well as potentials with both the customary and the statutory justice systems as regards GBV. First, the statutory system remains largely unavailable to the majority of the Liberian population, for reasons that include costs, travel distance, language and cultural barriers.

That being said, the statutory system offers a more standardized procedure, with the potential of ensuring a more gender-equal form of justice compared to many of the customary systems. On the other hand, the customary systems are far more readily available, and are also efficient in handling various kinds of cases. However, there are also limitations, includingthe perceived low legitimacy of traditional authorities among youth as well as among influential organizations and institutions
that support international human rights approaches, as women are often subordinate to men in the traditional institutions.

Both system have many potentials. The authorities in charge of customary law acknowledge their limitations in handling GBV cases, and many are also motivated to include perspectives from youth and women in today’s Liberia. As the customary systems are available and affordable to most of the populace, there is much to be said for empowering and strengthening their roles and also improving communication with the statutory system. The statutory system is overburdened and could benefit from stronger working relations with the customary system.