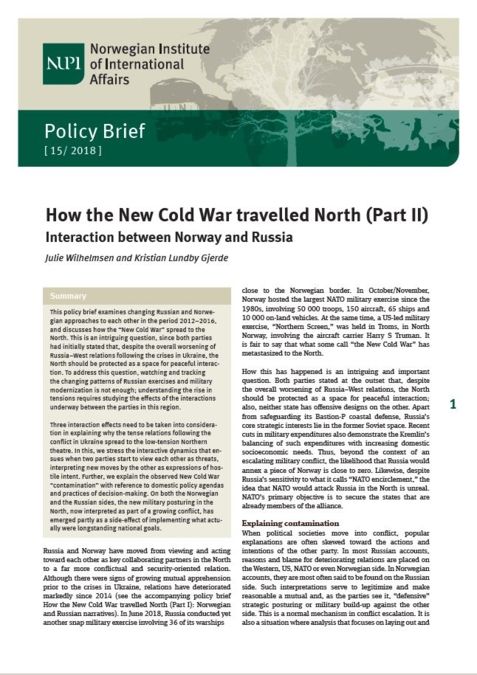 The Arctic Russia and Eurasia Utenrikspolitikk

This policy brief examines changing Russian and Norwegian approaches to each other in the period 2012–2016, and discusses how the “New Cold War” spread to the North. This is an intriguing question, since both parties had initially stated that, despite the overall worsening of Russia–West relations following the crises in Ukraine, the North should be protected as a space for peaceful interaction. To address this question, watching and tracking the changing patterns of Russian exercises and military modernization is not enough; understanding the rise in tensions requires studying the effects of the interactions underway between the parties in this region. Three interaction effects need to be taken into consideration in explaining why the tense relations following the conflict in Ukraine spread to the low-tension Northern theatre. In this, we stress the interactive dynamics that ensues when two parties start to view each other as threats, interpreting new moves by the other as expressions of hostile intent. Further, we explain the observed New Cold War “contamination” with reference to domestic policy agendas and practices of decision-making. On both the Norwegian and the Russian sides, the new military posturing in the North, now interpreted as part of a growing conflict, has emerged partly as a side-effect of implementing what actually were longstanding national goals.