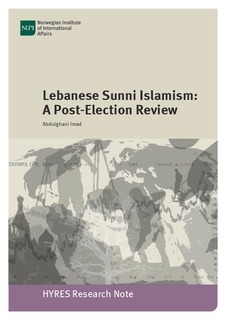 This research note analyses the internal and external factors that led to Al-Jama‘a al-Islamiyya‘s loss of its only parliamentary seat in 2018. Al-Jama‘a al-Islamiyya is the Lebanese branch of the Muslim Brotherhood. Through this case, the author assesses the status of Lebanon’s Sunni community and the electoral fortunes of regional Muslim Brotherhood organizations more generally. The main external factors leading to Al-Jama‘a al-Islamiyya’s electoral decline included the abandonment by the Future Movement, the law on proportional representation, potential regional involvement in the Lebanese elections and the rise of pro-Hezbollah Sunni MPs like those belonging to al-Ahbash. The internal challenges faced by Al-Jama‘a al-Islamiyya, on the other hand, include its strategic dilemma on how to position itself in the sectarianized 'New Middle East' after the Arab uprisings, as well as its organizational structure and its inability to properly convince its supporters of the last-minute alliance with the Christian Free Patriotic Movement (FPM). This note also analyses the fate of Lebanon’s Salafis and their absence from the elections, a result of the security pressures they face following their political support of the Islamist armed opposition in neighboring Syria. Furthermore, the research note explores the trajectory of the Al Masharee’ Association known as Al-Ahbash which, by returning to parliament in 2018, presented a fatal blow to the electoral hopes of Lebanon’s Sunni Islamists.