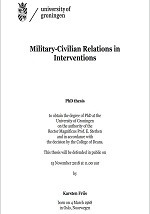 It is frequently claimed that success in interventions hinges largely on military–civilian coherence. Nevertheless, despite high ambitions, coherence among intervening actors has proven challenging to achieve in practice. Why is this so? The thesis asks: How can we theorize and analyse the challenges facing intervening actors to achieve military–civilian coherence in post-Cold War interventions? The thesis firstly develops a holistic understanding of the various actors present in an intervention and their inter-relationships – and offers a taxonomy of various forms of relationships between them. It then focusses on the military actors and discusses how they differ significantly from conventional peacekeeping to robust counter-insurgencies. The thesis then discusses the relations between military and humanitarian actors. Based on the first chapters it is thereafter argued that there is a need for a comprehensive analytical framework to make deductive analyses of interventions possible. It argues that by studying the identification processes of the intervening actors, insights into how they regard their role and how they regard the other actors, international as well as local, can be generated. This analytical framework is then applied to the case of Afghanistan to analyse the identities of three sets of actors – the military, the humanitarians and the state-builders, finding that the three entities appeared largely ignorant of each other, operating in parallel but not in conjunction. The thesis concludes with a discussion of the applicability of the analytical framework on other cases and with other research questions.