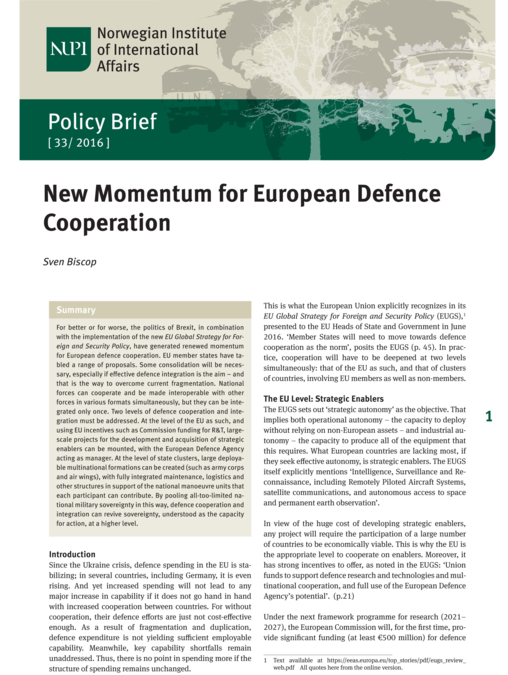 For better or for worse, the politics of Brexit, in combination with the implementation of the new EU Global Strategy for Foreign and Security Policy, have generated renewed momentum for European defence cooperation. EU member states have tabled a range of proposals. Some consolidation will be necessary, especially if effective defence integration is the aim – and that is the way to overcome current fragmentation. National forces can cooperate and be made interoperable with other forces in various formats simultaneously, but they can be integrated only once.

Two levels of defence cooperation and integration must be addressed. At the level of the EU as such, and using EU incentives such as Commission funding for R&T, largescale projects for the development and acquisition of strategic enablers can be mounted, with the European Defence Agency acting as manager. At the level of state clusters, large deployable multinational formations can be created (such as army corps and air wings), with fully integrated maintenance, logistics and other structures in support of the national manoeuvre units that each participant can contribute. By pooling all-too-limited national military sovereignty in this way, defence cooperation and integration can revive sovereignty, understood as the capacity for action, at a higher level.