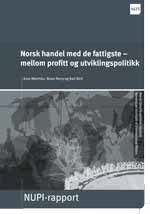 From 2002, duty-free, quota-free market access (DFQF) in Norway was granted for the Least Developed Countries (LDCs).

In 2008, Norway extended DFQF to another 14 low-income countries. The reform has so far not led to an aggregate increase in imports from the poorest countries, but selective import increases for flowers and some vegetables from Africa. Imports from other developing countries have increased considerably. Agricultural trade generally faces strict quality, logistics and health requirements that many of the poorest countries cannot fulfill, and trade may therefore be zero even if the tariff preference is huge. Private standards for corporate social responsibility and the environment also play an increasing role.

Nevertheless, there are several success stories where poor countries fulfill the standards and the study identifies successes as well as failures. Half of Norway’s import from developing countries is routed indirectly via other countries, mainly in Europe, and the value of trade increases on average by 83% on the way from a developing country to Norway. This value mark-up is higher for indirect trade and the poorest countries, and in some trades the markup may be several hundred per cent. In the study, various explanations are discussed. High price mark-ups, driven by trade costs and profit-seeking, is part of the story.

The LDC+14 countries comprise only 2-3% of economy and trade in the developing world and ¼ of the world’s poor. By improving market access for the lower middle income (LM) countries, more trade can be created with countries that have an income level at 1-5% of Norway’s and comprise more than half the world’s poor. A significant number of DFQF countries are already or will soon become LM countries. A reform where LM countries are granted significantly improved market access will allow a gradual transition and avoid a trade regime based on outdated criteria.

The poorest countries have more fundamental development problems and the “second poorest” are better able to exploit new market opportunities in Norway. High import markups may indicate limited competition and contribute to explaining Norway’s high price level, especially for food products. For some food products, imports are modest due to restrictive trade policies, and this limits the number of competitors and thereby the extent of competition.