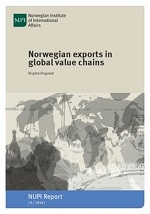 This study analyses the participation of the Norwegian economy in global value chains in 2000-2014, following the gross exports decomposition framework in Koopman, Wang and Wei (2014) and using the World Input-Output Database (WIOD). The analysis shows that Norway increased its participation in global value chains through both backward and forward linkages, but the latter is more dominant and re ects Norway's endowments in natural resources. Moreover, the study reveals that services exports increased substantially during the period analysed and are even higher than manufacturing exports if measured in value-added terms rather than gross terms. This highlights the key role of services in global value chains as well as the relevance of measuring trade in value-added terms.