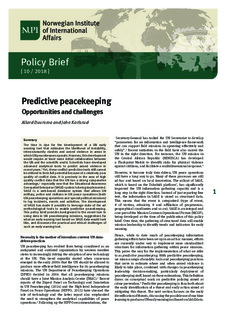 The time is ripe for the development of a UN early warning tool that estimates the likelihood of instability, intercommunity clashes and armed violence in areas in which UN peacekeepers operate. However, this development would require at least some initial collaboration between the UN and the scientific world. Scientists have developed advanced analytical tools to predict armed violence in recent years.1 Yet, these conflict prediction tools still cannot be utilized to their full potential because of a relatively poor quality of conflict data. It is precisely in the area of high quality conflict data that the UN has a strong comparative advantage,2 especially now that the Situational Awareness Geospatial Enterprise (SAGE) system is being implemented. SAGE is a web-based database system that allows UN military, police and civilians in UN peace operations (both UN peacekeeping operations and special political missions) to log incidents, events and activities. The development of SAGE has made it possible to leverage state of the art methodological tools to enable predictive peacekeeping. This policy brief provides background to the recent turn to using data in UN peacekeeping missions, suggestions for what an early warning tool based on SAGE data would look like, and discusses the practical and ethical challenges of such an early warning tool.