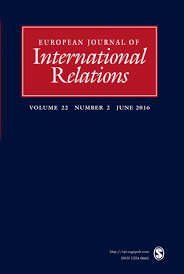 This article theorises containment as a diplomatic response mode for states when faced with potentially harmful attacks on their international identity and reputation. Despite widespread agreement in International Relations (IR) scholarship that identities matter in the context of state security, studies of crisis management have paid little attention to ontological security crises. Scholarly literature on public diplomacy has concerned itself mainly with proactive nation branding and reputation building; work on stigma management has privileged the study of how ‘transgressive’ states respond to identity attacks by recognising, rejecting or countering criticism. Our contribution is two-fold. First, we make the case that states do not perform as uniform entities when faced with ontological security crises – government representatives, bureaucratic officials and diplomats have varying roles and action repertoires available to them. Second, we argue that containment is a key but undertheorised part of the diplomatic toolkit in crisis management. Unpacking containment as a crisis management response mode, we combine insights from IR scholarship on emotions and diplomacy with insights on therapeutic practices from social psychology. We substantiate our argument with a case study of how Norwegian government representatives, bureaucratic officials and diplomats responded to escalating international criticism against Norway’s Child Welfare Services following a wave of transnational protests in 2016. A key finding is that whereas the dominant response mode of government ministers and bureaucratic officials was to reject the criticism, diplomats mainly worked to contain the situation, trying to prevent it from escalating further and resulting in long-term damage to bilateral relations.