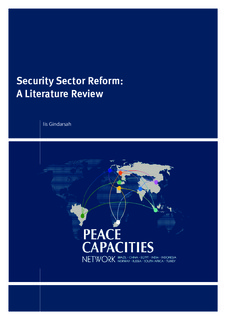 ‘Security sector reform’, or SSR, has become a cornerstone of international development, post-conflict peacebuilding and state-building initiatives. The term emerged in the late 1990s in recognition of the changing international security environment and the limitations of peace accords in failing and failed states. Aimed at promoting both effective and legitimate provision of security in countries emerging from conflict or undergoing processes of political transition, SSRrelated activities have growth significantly in scope as well as scale. However, security sector reform remains a contested concept that can have different meanings in different contexts and for different audiences. Various institutions, groups and nations involved in SSR tend to understand the concept on the basis of their own policies, doctrines and practices.1 Experience has also shown that SSR is often conducted in challenging political, socio-economic and security environments. Given the diversity of perceptions and contexts, SSR approaches and implementation vary greatly within the international community. Against that backdrop, this contribution reviews the comprehensive literature on security sector reform. Specifically, it asks: what were the authoritative influences and actors in the development of the SSR concept? What is the current state of theoretical discussion? What challenges and opportunities does adoption of SSR entail? How successfully has the concept been adopted in international peace operations? Are there any particular criticisms of the SSR concept? How might SSR practice be improved?