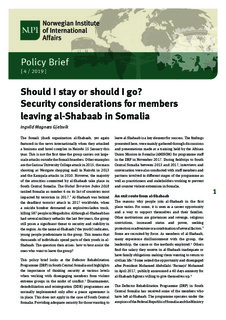 Should I stay or should I go? Security considerations for members leaving al-Shabaab in Somalia 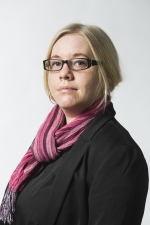 The Somali jihadi organization al-Shabaab, yet again featured in the news internationally when they attacked a business and hotel complex in Nairobi 15 January this year. This is not the first time the group carries out largescale attacks outside the Somali boarders. Other examples are the Garissa University College attack in 2015, the mass shooting at Westgate shopping mall in Nairobi in 2013 and the Kampala attacks in 2010. However, the majority of the atrocities committed by al-Shabaab take place in South Central Somalia. The Global Terrorism Index 2018 ranked Somalia as number 6 on its list of countries most impacted by terrorism in 2017.1 Al-Shabaab was behind the deadliest terrorist attack in 2017 worldwide, when a suicide bomber detonated an explosives-laden truck, killing 587 people in Mogadishu. Although al-Shabaab has had several military setbacks the last few years, the group still poses a significant threat to security and stability in the region. As the name al-Shabaab (‘the youth’) indicates, young people predominate in the group. This means that thousands of individuals spend parts of their youth in al- Shabaab. The question then arises: how to best assist the ones who want to leave the group?