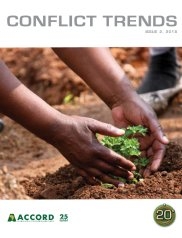 The Joint Force of the G5 Sahel: An Appropriate Response to Combat Terrorism?

The Joint Force of the Group of Five of the Sahel reflects the commitment of African states to cooperate to address common security challenges. Yet, little is known about its counter-terrorism strategy for the region. This article focuses on the security pillar of the G5 Sahel, the Joint Force (FC-G5S), and provides a critical examination of its mandate to combat terrorism in the Sahel. It explains the context into which the force was deployed and provides an overview of its conceptualisation and configuration. It demonstrates that in its current form, there is a danger of advancing a security-first stabilisation strategy that relies heavily on military-led counter-terror operations to contain and deter the threat of terrorist groups which can have serious consequences for local communities living among insurgents. The article argues that while establishing firmer border control and enhanced intelligence-sharing between the G5 Sahel states is important, the current counter-terror response risks depoliticising insurgents, and neglects the sociopolitical and economic grievances and problems of governance that have enabled violent extremism to take root in the first place. Removing the categorisation of jihadist insurgents as terrorists only and understanding their multifaceted identities – some as legitimate social and political actors – would open up more policy responses, including dialogue and conflict resolution.