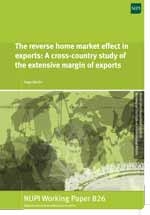 The reverse home-market effect in export. A cross-country study of the extensive margin of exports