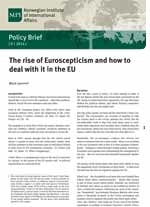 It used to be seen as a British disease, but Euroscepticism has spread like a virus across the continent – infecting creditors, debtors, would-be euro-members and outs alike. Trust in the European project has fallen even faster than European interest rates. Since the beginning of the crisis, France losses 32 points, Germany -49, Italy -52, Spain -98, Poland -44, UK –36.The damage is so deep that it does not matter whether coun-tries are creditors, debtor countries, would-be members of the euro or countries with opt-outs: everybody is worse off. Back in 2007, people thought that the UK, which scored minus 13 points in trust, was the Eurosceptic outlier. Now, the four members of the eurozone come in well below Britain in their trust for EU institutions: Germany -29, France and Italy -22, Spain -52. What is happening?I think there is a fundamental crisis at the level of narrative for Europe, in the nature of the EU project and in political organization at a national level.