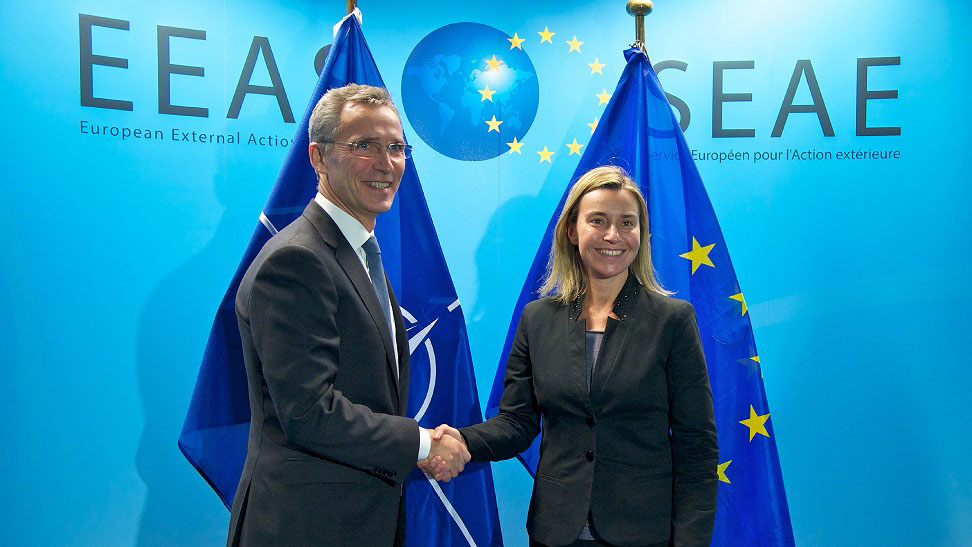 JOITN EFFORTS: In response to the refugee crisis, the EU and NATO have gradually managed to find a way to work together, writes NUPI Senior Research Fellow Nina Græger.

Building Bridges with the EU

The activities that NATO has undertaken to address the refugee crisis in the Mediterranean focus on intelligence and surveillance, and are designed to complement the efforts of the EU and Turkey, writes Nina Græger for European Futures.

Over the past few years, Europe has redefined and reoriented its understanding of security. Threats are more diverse and come from many corners of the world. Instability in the Middle East, and especially the Syrian war, has resulted in an influx of asylum seekers arriving at Europe’s southern borders.

On the Eastern border, Europe grapples with the political and military consequences of the Russian annexation of Crimea in 2014 and ongoing destabilisation of Ukraine. In the heart of Europe, radicalised individuals or groups have conducted deadly terrorist attacks against the cities of Paris, Brussels and Istanbul. In addition, there are new types of threats, such as cyberattacks and ‘hybrid warfare’, demanding new and bold solutions.

Since 2015, refugees have been arriving to Europe in large numbers, entering Europe via Italy, Greece and Turkey. Once in Europe, refugees would continue north, through the Western Balkans. With the closing of borders in some European countries and the building of physical barriers in others, many refugees have returned to Greece or Turkey, or are stuck at border crossings or in illegal compounds (eg in Macedonia and Normandy, France). Despite economic recession and constrained budgets, national and international actors, as well as the European public, have demanded that Europe take action.

Both NATO and the EU have become important in handling the refugee crisis. Acting at the request of Turkey, Greece and Germany, NATO defence ministers decided on 11 February 2016 to move all standing forces from the Mediterranean to the Aegean to assist in the refugee crisis. While claiming that ‘the refugee crisis posed a major security threat to the alliance’, Secretary General Jens Stoltenberg stressed that NATO would not take on a direct role against criminal networks and traffickers.

In response to the critique that the mission was not the safety of refugees, but to deter migrants from crossing the Aegean, Stoltenberg reassured that: ‘This is not about stopping and pushing back refugee boats… but about critical surveillance to help counter human trafficking and criminal networks’.

Thus, NATO’s main objective is to conduct intelligence and surveillance about people-smugglers and hand the information over to Turkey, to help it combat traffickers in an effective way. Refugees rescued from boats in danger of sinking by NATO vessels are returned to Turkey. However, NATO’s maritime mission could also be read as part of NATO’s reassurance policy – in this case vis-à-vis Turkey – and as deterrence against Russia in the Eastern Mediterranean, which has increased its maritime presence around Syria.

Finalising the details of NATO’s maritime mission has been particularly demanding, because of the tensions between Greece and Turkey. For more than a decade, these tensions have created a political stalemate in the EU-NATO relationship, where the ‘Cyprus issue’ has hampered formal cooperation under the ‘Berlin Plus’ agreement and framework. The working solution is that both Greek and Turkish ships participate in the NATO mission, but remain in their respective territorial waters.

The EU has not defined the refugee crisis as a threat against Europe’s security per se, but as a case of organised crime and a serious challenge to European governments and institutions. The crisis demands resolute leadership as well as resources, also raising questions about the entire concept of European solidarity and integration. As noted by EU/HR Federica Mogherini, it ‘puts our deepest values – even our identity – to the test’.

The main political EU contribution to managing the refugee crisis so far is the agreement of March 2016 saying that Turkey will receive more than €3 billion to keep refugees from moving on to Europe. Apart from stopping Turkey from opening up its borders, it seeks a more just system of distribution (or relocation) of migrants inside the EU, although the latter has been blocked by some states.

The agreement opts for an intermediate-term solution, but does not solve the crisis for refugees or its root causes.

Furthermore, Turkey’s conditions for signing the agreement clearly had a national strategic aim beyond the refugee crisis, concerning its relationship with the EU and, indirectly, the EU-NATO relationship.

In response to the refugee crisis, the EU and NATO have gradually managed to find a way to work together. On 7 March 2016, NATO and Frontex (the EU agency responsible for external border control) agreed on a set of joint efforts to address the refugee and migration crisis. The emphasis on having reached a ‘common understanding’ on the modalities of the cooperation, which in practical terms basically means ensuring consistency and complementarity of the Frontex operation and NATO’s support activities, is important.

When international events demand a European response, such as the Ukraine crisis, or when violent incidents happen on the ground in mission areas where the EU and NATO are running separate operations (eg in Kosovo or the Gulf of Aden), EU and NATO officials have often agreed informally on practical measures to address these challenges. Staff in the anti-piracy operations EU-Atalanta and NATO’s Ocean Shield have worked together informally in the Gulf of Aden for many years.

In the context of the refugee crisis, this is a new area of cooperation that opens up arenas where the NATO Secretary General and his EU counterparts will meet to discuss and update each other on the refugee crisis but also on other EU-NATO relevant issues.

Together with a more central role for Turkey, also vis-à-vis the EU, enhanced practical cooperation at sea in handling refugees might itself herald more calm waters ahead for EU-NATO relations.