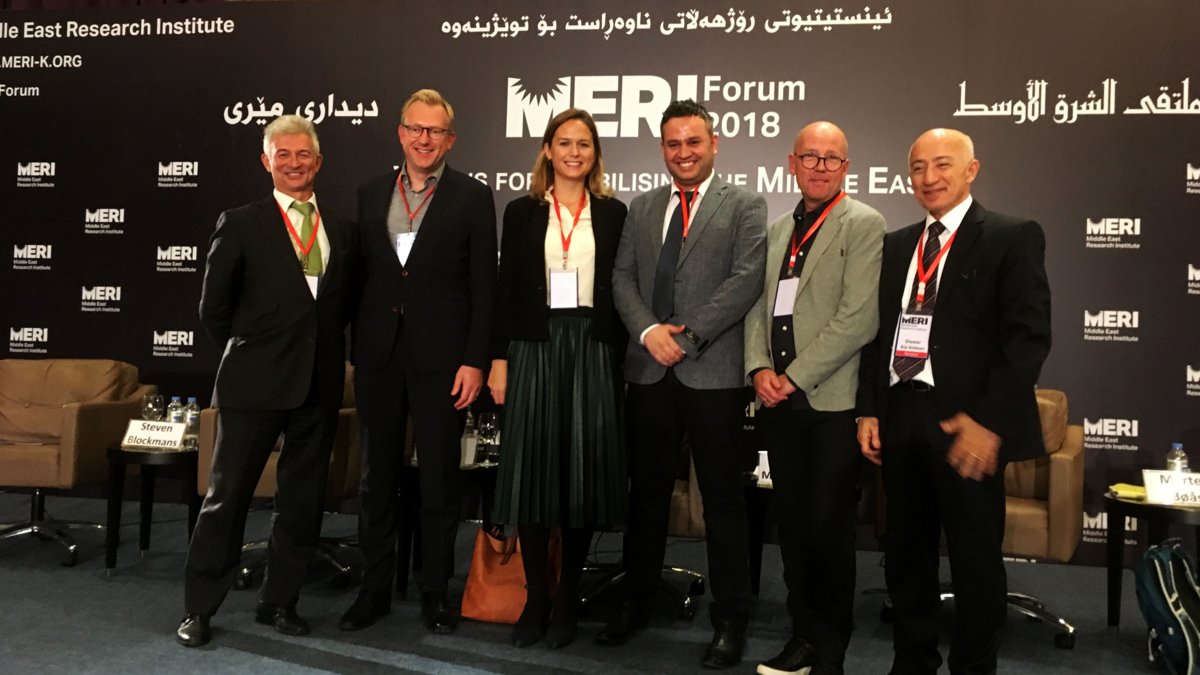 The EU in the Middle East - how to prevent terrorism and violent extremism?

That was the topic for the project EUNPACK's contribution to the MERI Forum 2018.

Morten Bøås opened the panel discussion by stating that there are many factors that lead people to give up the very idea of a modern state, ranging from livelihood crisis, youth unemployment, effects of climate change, and population growth.

States faced by such challenges are often fragile and in dire need of external assistance, but due to their low absorption capacity, they are also the most difficult to assist. Thus, the answer to preventing radicalization in such places is not necessarily spending more money, but spending them better and more wisely.

Equally important, local knowledge and participation is crucial: as the cases of Afghanistan, Libya, and Iraq have demonstrated, the international community alone cannot build states.

Such a process must be bottom-up, not top-down, which research findings from the EUNPACK project draw attention to. The question, then, is how the EU can become better in assisting such processes

The stability of the EU starts in the Middle East

The EU’s Ambassador to Iraq, Roman Blecua, underlined that the stability of the EU and Europe does not start at our borders, but in the Middle East.

External intervention is often what causes radicalization, the Ambassador argued, and the EU must therefore step carefully when engaging in complex theatres. He also argued that Iraq is now a ‘laboratory’ for political solutions to integrate all elements (e.g. Sunni, Shia, Kurd, and their international backers), thus diffusing conflict and allowing for peacebuilding.

EU more security- and interest-driven in the Middle East

What the EUNPACK project has found in this regard, as pointed out by Steven Blockmans, is that the EU’s approach towards the region has become more security- and interest-driven.

Acting under the self-proclaimed banner of ‘principled pragmatism’, the EU is solution-orientated but at the same time risks diminishing its credibility in the eyes of those locals whose rights it wishes to protect or promote.

This has for example been evident in the field of migration, where the Syrian refugee crisis led to a EU policy in its wider neighbourhood largely evolving around counter-terrorism and anti-migration (i.e. EU-Turkey deal, cooperation with Libyan militias, etc.). Blockmans argued that the EU needs

A balance between both security and development, and values and interests will be crucial to achieve this. As such, he argued, the EU can go beyond acute crisis response to address other dimensions in a much more sequenced and integrated fashion.

Kamaran Palani Mohammed stressed that while the concepts of terrorism and violent extremism have much in common, they require different approaches.

In other words, the state must be crucial in the former and civil society in the latter. A problematic factor in the context of the Middle East is that locals generally perceive a strong state as equivalent to a ‘strong’ regime.

This narrative must be challenged, he argued, by emphasizing the distinction between state security and regime security. After all, according to Mohammed, a strong state is a precondition for democracy, in the region and elsewhere.

What about religious institutions?

But are there other actors than the state and civil society that can be prominent in this field?

According to Tine Gade, there are. In her research, Gade has explored the role of official religious institutions in preventing violent extremism.

As in Saudi Arabia and Morocco, such institutions can indeed play a constructive role. A key challenge, however, is that they lack popular legitimacy because governments tend to use them for own political objectives. Political autonomy for religious institutions could increase their popular legitimacy, thus also making them more effective in preventing radicalisation.

Overall, the panel agreed that to prevent violent extremism, the root causes need to be addressed.

In order to achieve this, the EU’s crisis response in the Middle East needs to be more bottom-up and conflict sensitive by including real experiences from the field rather than being inspired by ‘Brussels’.

This will be essential for the EU to be viewed as a legitimate and credible actor by local stakeholders, whom at the end of the day should be steering crisis management and peacebuilding processes. Local knowledge and participation is crucial in solving local issues. This requires both a strong state (not regime) and a strong civil society. By strengthening these (f)actors, the EU could play a more meaningful role in tackling the global challenge of violent extremism.