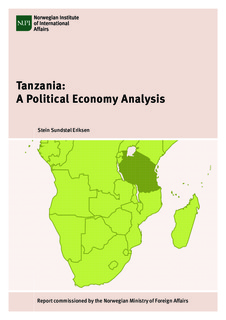 This report provides a comprehensive political economy analysis of contemporary Tanzania. Focusing on developments since the election of John Magufuli as President, it traces the evolution of the country´s political economy. Three main developments are emphasized. First, significant efforts have been made at addressing corruption, reforming public service practice, and maximizing public revenues. Second, there has been a clear shift towards a state-led model of economic development. This reconfiguration is unfolding in an increasingly competitive political environment and in the context of long-standing symbiotic relationships between politics and business. Third, there has been an increasingly restrictive approach towards civil society. Representatives of the public have been arrested and detained, and open political gatherings have been banned. The potential impact of these changes on the political settlement are complex. Factionalism within the CCM in recent years have been characterized by repeated cases of grand corruption. Still, there has been remarkable party cohesion, related to the fact that the factions belong to a narrow elite, which with ultimately has shared interests. Effective state-led development faces several challenges. Political capacity to direct long-term developmental change has been challenged by the development of factions within the CCM. Moreover, there are limits to the state’s capacity to formulate and implement policy. Uncertainty over public finances, particularly regarding international commercial borrowing, will, in the short term at least, stymie efforts to make the public service more effective. The greater political challenge is that posed by CHADEMA. With the 2015 elections, it consolidated itself as the leading political opposition in mainland Tanzania, with stable leadership and a solid organization in much of the country. CHADEMA´s relationships with Tanzanian private-sector interests leave its supporters open to targeted actions by tax and regulatory authorities. The state´s repressive approach towards civil society reflects the level of threat perceived by the ruling elite. External issues – like shifting relationships with donors, the emergence of new international allies and financiers, and security threats from transnational groups – are more tangential to the future direction of the Tanzanian state. Their impact will depend on trajectories in the areas of political and administrative capacity, relations between capital and the state, and the levels of political and civic organization beyond the party and the state. Dialogue with development partners has remained generally poor, a decline that set in some years ago. Like other countries in the region, Tanzania is increasingly attracting investment and public debt finance from China, from emerging powers like Turkey, and from others with an investment interest in Tanzania, such as the Gulf states.