Nordic responses to Brexit: Making the best of a difficult situation 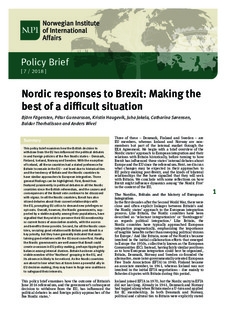 Security policy  Diplomacy  Foreign policy  The EU  NATO  Europe  The Nordic countries  Regional integration  Governance
Summary:
This policy brief examines how the British decision to withdraw from the EU has influenced the political debates in and foreign policies of the five Nordic states – Denmark, Finland, Iceland, Norway and Sweden. With the exception of Iceland, all these countries had a stated preference for Britain to remain in the EU – not least due to historical ties and the tendency of Britain and the Nordic countries to have similar approaches to European integration. Three general findings can be highlighted: First, Brexit has featured prominently in political debates in all the Nordic countries since the British referendum, and the causes and consequences of the Brexit vote continue to be discussed with vigour. In all the Nordic countries, Brexit has also stirred debates about their current relationships with the EU, prompting EU critics to demand new privileges or opt-outs. Overall, however, the Nordic governments, supported by a stable majority among their populations, have signalled that they wish to preserve their EU membership or current forms of association models, with the access and benefits these provide. Second, for all the Nordic countries, securing good relations with Britain post-Brexit is a key priority, but they have generally indicated that maintaining good relations with the EU must come first. Finally, the Nordic governments are well aware that Brexit could create a vacuum in EU policy-making, perhaps tipping the balance among internal clusters. Britain has been a highly visible member of the ‘Northern’ grouping in the EU, and its absence is likely to be noticed. As the Nordic countries are about to lose what has at times been a powerful ally in EU decision-making, they may have to forge new coalitions to safeguard their interests.