Shifting from External Dependency: Remodelling the G5 Sahel Joint Force for the Future 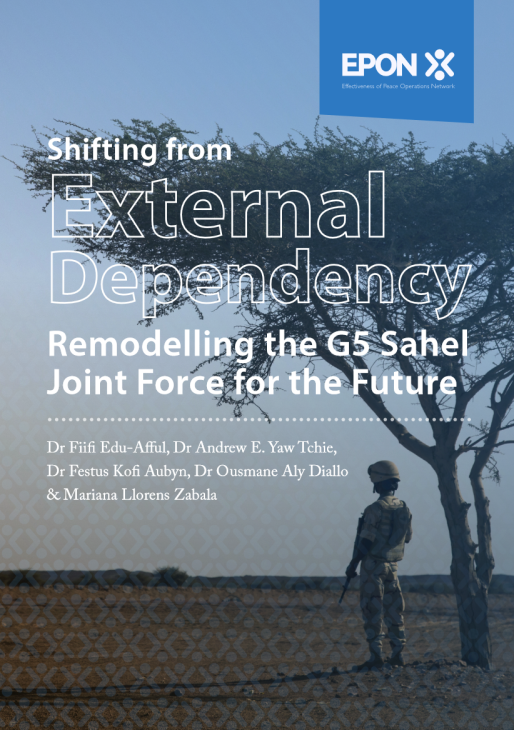 Peace operations  United Nations  Africa  International organizations
Summary:
After a decade of battling jihadist and violent extremist groups in West Africa, France has initiated the restructuring and relocation of its largest overseas military mission in the Sahel with an announcement of the withdrawal of Operation Barkhane (the French military counterterrorism intervention) from Mali. The exit over the coming months may signify an important shift of western military operations in Mali and the Sahel. France’s deployment in the Sahel was initially triggered by the activities of Tuareg separatists in the northern part of Mali. Islamic extremists closely associated with Al-Qaeda took advantage of the situation, seizing north Mali and spreading their activities southwards in 2012. Despite French counterterrorism operations, instability worsened, and Islamists controlled vast swathes of northern and central Mali, parts of Burkina Faso, and western Niger.

Over time, under the motivation of France, the G5 Sahel Joint Force (G5S-JF) was created to address the everyday challenges of terrorism and transnational organised crime among the five member states (Burkina Faso, Chad, Mali, Mauritania, and Niger). For a force supported by three United Nations Security Council Resolutions 2359 (2017), 2391 (2017) and 2480 (2019); and with a force strength of 5600 troops organised around three sectors,1 its operational successes have been a mixed bag (ten joint border operations). Operation Barkhane together with European Union Training Mission Mali (EUTM), the Capacity Building Mission in Mali (EUCAP Sahel Mali) and Niger (EUCAP Sahel Niger) and the United Nations Multidimensional Integrated Stabilization Mission in Mali (MINUSMA), has enhanced the operational readiness and capabilities of the G5 Sahel through mentoring, training, and funding of the joint-force operations.

Additionally, these external operations, particularly Barkhane, have been supportive of the activities of G5S-JF by providing intelligence, supporting logistical and joint planning, providing aerial and air support, and engaging in medical evacuation. Notwithstanding, the Joint Force has been contending with weak intelligence, shortfalls in equipment, limited aerial capabilities and a lack of rapid response, which invariably hinders operational effectiveness. The Joint Force represents an essential step toward addressing the instability that affects Mali and the broader Sahel, but as of yet, the G5S-JF has been unable to fully demonstrate its effectiveness as a force despite significant support from donor countries such as France. Moreover, it is uncertain how Mali´s withdrawal from the Joint Force will impact on the overall strategy of the G5S-JF and its sustainability going forward, especially given Mali’s recent announcement of withdrawing from the G5 Sahel.

The departure of Barkhane, together with Takuba and other European arrangements from Mali, raises many unanswered questions about the funding, operational capacity and political cooperation between the other member states of the Joint Force. Even though France has reiterated that it will continue to support peacekeepers serving under MINUSMA; and Malian troops continuing to battle Islamic violent extremism after the Barkhane withdrawal, the response time to jihadist attacks and activities inside Malian territory will not be the same. Without Barkhane, the G5S-JF will struggle to protect civilians, evacuate soldiers in need of medical attention, and support effective joint planning and coordination of G5S-JF and intelligence sharing —which has been instrumental in the fight against jihadist.

To address emerging challenges, enhance the ability of the G5S-JF and sustain its support, this report proposes four possible options that could fill the gap resulting from the current security vacuum being created following the possible withdrawal of some of the external military forces from Mali, and Mali itself from the G5S-JF. In arriving at these proposed options, emphasis is placed on regional perspectives, which draws on African frameworks and the use of African resources, experience, capabilities and understanding. The report argues that this would allow better ownership and closer proximity to the issues, ensuring that international partners are not dictating how the region and African Union (AU) Member States (MS) should solve challenges. The evaluation considered the full spectrum of options to include:
• A reconfigured and scaled-up G5 Sahel Joint Force (Plus);
• A reconfigured G5 Sahel Joint Force and revised MISAHEL through the AU, ECOWAS, ECCAS and CENSAD;
• An integrated ECOWAS (deployment of the African Standby Force) utilising the G5 Sahel force; and
• Elevating the G5 Sahel force to an AU (Peace Enforcement mission) with UN support.

The proposed options focus on military and hybrid solutions that can tackle existing challenges in the Sahel and West Africa as a whole. However, defeating jihadism and violent extremism is essentially a job that should include intelligence and police authorities to win the hearts and minds of the population, but this cannot be done solely with hard stabilisation efforts. Tackling the vast challenges in the Sahel requires a careful mix of adaptive, agile and sustained efforts that cut across social, economic, political, developmental, humanitarian and recovery instruments and support. Thus, the report suggests additional stabilisation efforts to support the Sahel focused on local, national, regional and international initiatives that can connect to the ground and tackle internal challenges comprehensively. These initiatives, it will be argued, can plug into existing structures but also help to support structures not fully recognised. Efforts to resolve the problems in the Sahel stand a much greater chance of success if fully supported with buy-in from the AU, together with ECOWAS and support from the UN, EU and donors that can draw on the full spectrum of available instruments which have a demonstrable desire to work with like-minded partners. The authors of this report believe that a scaled-up and reconfigured G5 Sahel Joint Force (G5 Sahel Plus) option (discussed below) would have been the optimal model. However, following the recent withdrawal of Mali from the G5S-JF and the deteriorating political landscape in the region and between states, the authors’ reassessment calls for an AU Peace Enforcement mission as the most appropriate, given the current situation. It is important to note, the recommendations provided in this report hinge on the ability of the current and former G5S-JF states to address and resolve the deteriorating political situation, which is fluid in nature and continuously evolving. This will require all states (current and former G5S-JF) to recognise that they need each other to address these challenges, and that any reconfiguration (the models provided in this report) depends on the political situation being fully addressed. There is a need, as the models indicate, to have more joint efforts between the AU and ECOWAS to assist in resolving the current impasses in the region.