How does Sri Lanka work to advance reconciliation after the civil war that ended in 2009?

Honourable Mangala Samaraweera, Minister of Foreign Affairs of Sri Lanka, will visit Norway to attend the 6th World Congress against the Death Penalty. He represents a government that, after entering power in 2015, have taken a new and constructive approach towards the country’s minorities. Sri Lanka is currently making large efforts to reconcile Sinhaleses, Tamils and muslims in the aftermath of the civil war, which came to an end in 2009. This work is anchored in the UN’s efforts for human rights. As part of his visit, Foreign Minister Samaraweera will give a talk on this important work.

After having his primary education at Royal College, Colombo, Mangala completed his studies in London. He obtained his BA (Hon) in Fashion and Textile Design at the prestigious Central St. Martins in London. On his return to Sri Lanka in 1982, he worked as a visiting lecturer at the Institute of Aesthetic Studies, University of Kelaniya as well as being a consultant to the Department of Textiles, spearheading a campaign to market local textiles in the west.

In 1988, Mangala entered the political arena at the request of Hon. Sirimavo Bandaranaike, leader of the Sri Lanka Freedom Party and in the General Elections of 1989, Mangala Samaraweera was elected as a Member of Parliament for the Matara District and he has continuously represented the Southern constituency, making him one of the most senior Parliamentarians in Sri Lanka today. In the Presidential Election of 2015, his constituency in Matara defeated the incumbent Mahinda Rajapaksa. 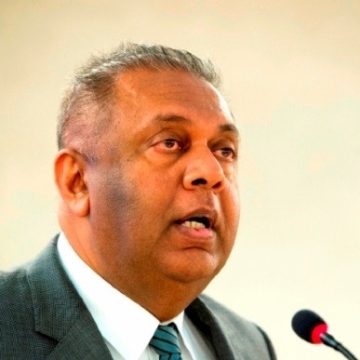