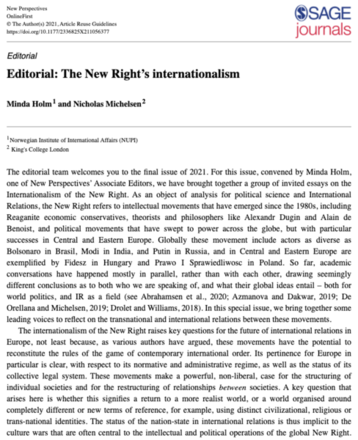 Security policy  Governance  Foreign policy  International organizations  Diplomacy  Russia and Eurasia  Europe  Historical IR
Summary:
The editorial team welcomes you to the final issue of 2021. For this issue, convened by Minda Holm, one of New Perspectives’ Associate Editors, we have brought together a group of invited essays on the Internationalism of the New Right. As an object of analysis for political science and International Relations, the New Right refers to intellectual movements that have emerged since the 1980s, including Reaganite economic conservatives, theorists and philosophers like Alexandr Dugin and Alain de Benoist, and political movements that have swept to power across the globe, but with particular successes in Central and Eastern Europe. Globally these movement include actors as diverse as Bolsonaro in Brasil, Modi in India, and Putin in Russia, and in Central and Eastern Europe are exemplified by Fidesz in Hungary and Prawo I Sprawiedliwosc in Poland. So far, academic conversations have happened mostly in parallel, rather than with each other, drawing seemingly different conclusions as to both who we are speaking of, and what their global ideas entail – both for world politics, and IR as a field (see Abrahamsen et al., 2020; Azmanova and Dakwar, 2019; De Orellana and Michelsen, 2019; Drolet and Williams, 2018). In this special issue, we bring together some leading voices to reflect on the transnational and international relations between these movements.