Preface - Russia's turn to the East 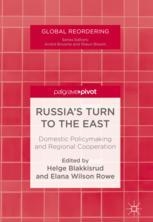 Europe  The EU  Foreign policy  Regional integration  International investments
Summary:
Pictures can sometimes be more revealing than words. If you ever sit down and look at a night-time satellite picture of the Earth, you will find that there are still huge areas on our planet that are not lit up by human activities and cities.

One of the largest ‘dark spots’ in the Northern Hemisphere is found in the Russian Far East, or Pacific Russia. Here are enormous territories rich in natural resources like petroleum, minerals, forests and water – but these vast reaches are sparsely populated, and lack connective infrastructure. A closer look at the satellite image will reveal a tiny thread of light, almost like an umbilical cord, linking the Far Eastern part of Russia with the European part. This is the Trans-Siberian Railway that connects the Eastern and Western parts of Russia.

The same satellite picture shows few traces of networking with the territories of the immediate neighbourhood – the brightly lit, heavily populated, urbanized and dynamic Asian economies of China, Japan and the Republic of Korea. It is hardly surprising that Russia has intensified its efforts at closer integration with these Asian neighbours, economically and politically. For Russia, this pivot to Asia represents huge opportunities, but it also entails significant economic, administrative, technological, cultural and strategic challenges.

The contributors to this book examine the nature, speed and direction of the long-term structural shift. Rather than taking the declared ‘pivot’ as a fact and exploring the likely consequences, the authors ask whether there has in fact been such a new pivot – or if what we see today is a continuation of longer-duration trends, concerns and ambitions.

The authors explore the relationship between integration and disintegration, examining whether Russia’s turn to the East has intensified or changed in nature – domestically and internationally – since the onset of the current crisis in relations with the West. In turning to the East, is Russia also turning away from the West?

This project is a result of collaboration involving scholars from Norway, Russia, Korea and the UK, and has been supported financially by the Korea Foundation and the Norwegian Ministry of Foreign Affairs. In preparing this book, we have also benefited from our involvement in the project ‘Developing Asia Pacific’s Last Frontier: Fostering International Cooperation in the Development of Russia’s Far East and Siberia’, working with partners in Russia, Japan, China and Singapore.