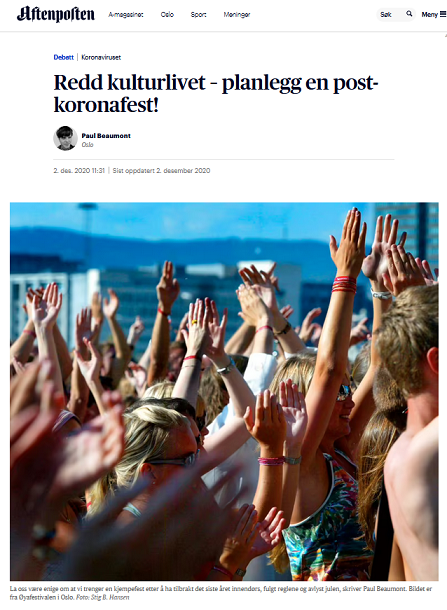 Defence  Security policy  Conflict  Humanitarian issues  Nationalism  Foreign policy  Oceans  Governance  International organizations  The EU  Historical IR  The Nordic countries  Europe  The Arctic  South and Central America  North America
Summary:
A debate is raging about how to save Norwegian cultural life from Corona. The government’s rescue package is widely considered insufficient and thus the argument is concentrated upon how much is needed and to whom it should go. This is sensible, but the depressive terms of the debate have blinded everyone to a unique opportunity. Now we know vaccines are coming, it’s time to think bigger, more collective and long term.

Why not put these unemployed cultural workers to do something they are good at: throwing a party? Not just any old party: a month-long, state-sponsored, Norway-wide, series of festivities to celebrate Corona’s passing. Like an end of the world party, but celebrating the world not ending. It could be spread throughout public spaces, like the Edinburgh festival, but less exclusive, as big as the Olympics, but less lycra.

If that sounds crazy, hear me out. First of all, Norway has a lot of latent party talent unemployed through no fault of their own. That means, in practice, NAV is currently paying professional event-organisers not to organise parties. Likewise, the state is currently paying 60-80% of the income of musicians, technicians, actors, theatre workers, and many more who could contribute. Thus, we could treat whatever the government is paying them now as a free subsidy, and just top it up so they can put on a massive party instead.

It would not only make financial sense. A post-Corona party would also provide these workers with a purpose, and give the country something to look forward to amidst a year of depression and uncertainty. Indeed, Norwegians are unusually well-trained for just such an event: generations of Russ, who would surely relish the opportunity to get back on a bus.
The key to a successful post-corona party would be inclusiveness.

First, it should take place in July when schools are out. Second, the party should be spread throughout the communes. Third, it should embrace the broadest definition of culture possible; from futbal to opera, comedy to skateboarding, cinema to puppetry. Fourth, all events should be free at the point of use; like the British NHS. In short, there should be something for everybody and everybody should be able to afford it.

Ultimately, the event would pay for itself. Norway will need to instigate a stimulus to kick start the economy anyway. A massive party would be like a New Deal, except with culture instead of infrastructure. Indeed, like infrastructure, investing in culture would produce what economists call a “multiplier effect”; whereby money injected into the economy fosters growth above the initial outlay. Further, turn it into a global event and it will generate tourist revenues. It may even persuade Norwegians to take a vacation at home instead of Syden.

Beyond helping to save culture, it would be cathartic for citizens. Providing a much needed release after a dark period. Let’s face it, we deserve a big party, having spent the last year staying in, following the rules, and cancelling Christmas.