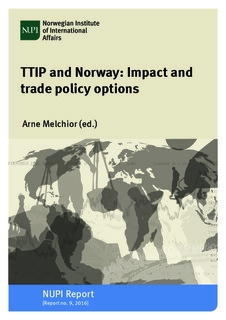 International economics  Trade  Economic growth  Foreign policy  International organizations  Asia  Globalisation  International investments  Regional integration
Summary:
This study analyzes TTIP, its implications for Norway and Norway’s trade policy choices. TTIP will hardly be concluded under Obama's presidency, but the agreement could become a reality within a few years. TTIP aims at comprehensive cooperation in the regulatory area. In the short term there will be limited harmonization of standards but regulatory cooperation between different systems. In the long term, the goal is stronger cooperation in the regulatory area. TTIP will from what we know not lead to a lowering of European health regulations or a "race to the bottom". If TTIP is realized and Norway remains outside, the EEA Agreement will be little affected and the overall economic impact is moderate. If Norway joins TTIP, there will be a significant real income gain, with estimates ranging from 2236 to 6772 NOK per capita in the various scenarios. There is considerable variation across sectors. With Norway outside TTIP there will be a moderate negative impact for a majority of the sectors, especially some manufacturing sectors that face tougher competition in the EU and USA export markets. The oil industry will benefit from increased demand and higher prices. If Norway joins TTIP, a clear majority of industries will benefit; especially business services and a number of other service industries. The public sector gains from TTIP, mainly due to cheaper inputs. TTIP will contribute to the dismantling of import protection for Norwegian agriculture and without compensating measures, production and employment will be reduced. TTIP will still allow some import protection and this margin of maneuver, which depends on future negotiations, is important for the outcome. With a larger margin of manoeuvre and unchanged budgetarty support, most of Norway’s agriculture can be maintained. With less margin of manoeuvre, it will be more challenging. Norwegian accession to TTIP may occur in the form of a standard trade agreement in which Norway or EFTA are formally equal to the EU and the United States. Alternatively, Norway may participate in a European pillar as in today's "Open Skies" agreement on air traffic. If TTIP succeeds in establishing comprehensive regulatory cooperation, the latter solution is most likely. Such a solution implies that Norway will become more closely integrated with the European Union also in trade policy towards third countries. Norwegian entry into TTIP implies that we have to accept the established rules and negotiate bilaterally with the EU and the USA on market access. The negotiations with the USA will apply to all aspects of market access, while negotiations with the EU will apply only to areas in which the EEA agreement is not already deeper. The negotiations with the EU for TTIP entry will thus include, among other issues, tariffs for seafood and agriculture. As an alternative to membership in TTIP, Norway or EFTA may initiate a trade agreement with the USA. Such an agreement would likely be less extensive in the regulatory area. Such an agreement will also provide an economic gain for Norway, but less than accession to TTIP. For Norway as a whole, accession to TTIP creates a real income gain between 12.5 and 35 billion NOK according to various scenarios, while a free trade agreement with the United States results in a gain of about 7.4 billion NOK. TTIP also includes negotiations on so-called Investor-State Dispute Settlement (ISDS), whereby foreign-owned companies can sue a state if they are unfairly or inappropriately treated. Such rights also exist in national law but international tribunals have to some extent extended the interpretation of what is considered unfair. The European Union has proposed a solution in TTIP with a permanent court as well as rules that discipline the interpretation of the principles, and thus avoids that ISDS unduly interferes into the states’ "right to regulate". This and many other issues are analysed in this report and six background papers.