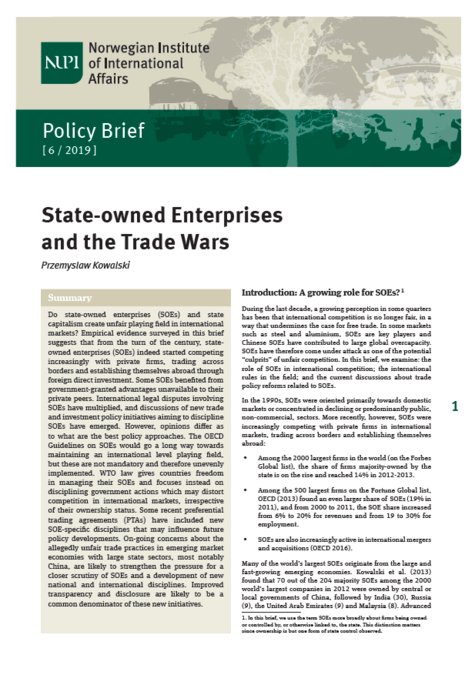 State-owned Enterprises and the Trade Wars

Do state-owned enterprises (SOEs) and state capitalism create unfair competition in international markets? Empirical evidence surveyed in this brief suggests that from the turn of the century, state-owned enterprises (SOEs) indeed started competing increasingly with private firms, trading across borders and establishing themselves abroad through foreign direct investment. Some SOEs benefited from government-granted advantages unavailable to their private peers. International legal disputes involving SOEs have multiplied, and discussions of new trade and investment policy initiatives aiming to discipline SOEs have emerged. However, opinions differ as to what are the best policy approaches. The OECD Guidelines on SOEs would go a long way towards maintaining an international level playing field, but these are not mandatory and therefore unevenly implemented. WTO law gives countries freedom in managing their SOEs and focuses instead on disciplining government actions which may distort competition in international markets, irrespective of their ownership status. Some recent preferential trading agreements (PTAs) have included new SOE-specific disciplines that may influence future policy developments. On-going concerns about the allegedly unfair trade practices in emerging market economies with large state sectors, most notably China, are likely to strengthen the pressure for a closer scrutiny of SOEs and a development of new national and international disciplines. Improved transparency and disclosure are likely to be a common denominator of these new initiatives.