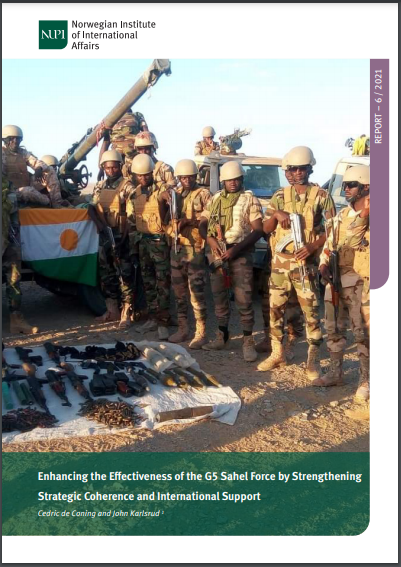 At the UN Security Council and in other forums in Africa and Europe diplomats are considering how to increase international support to the G5 Sahel Force. The support is aimed at filling critical gaps that have hindered the mobility and operational tempo of the G5 Sahel Force. The overall goal is to enhance its operational capacity and effectiveness in an effort to restore stability in the Sahel. Despite the presence of the UN Stabilization Mission in Mali (MINUSMA), the Group of Five Sahel (G5 Sahel) Force, as well as French-led and European Union missions, the security situation in the Sahel has significantly deteriorated over the last few years. Drawing on lessons identified from the support provided by the UN to the African Union Mission in Somalia (AMISOM), and a wide number of experiences with voluntary funded trust funds in other mission support set¬tings, we discuss a few political, financial, doctrinal, human rights and operational considerations. We find that a UN support office funded from assessed contributions, complimented with voluntary contribu¬tions, appear to be the only solution for reliable and predictable support to those core needs of the G5 Sahel Force that cannot be met by the G5 Sahel countries themselves, or via bilateral support to those countries.