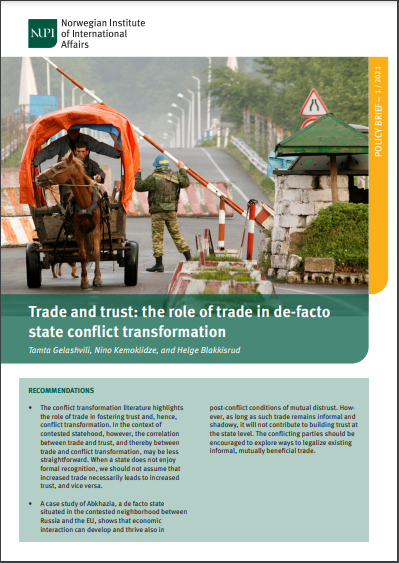 Trade and trust: the role of trade in de facto state conflict transformation

De facto states – unrecognized secessionist entities that eke out a living on the margins of the international system – are often heavily dependent on external patron states for economic aid and investment. When the parent state – the state that the de facto state seeks to break away from – responds to the secessionist attempt by imposing sanctions or economic blockades, this further exacerbates such dependency. Moreover, due to their lack of international recognition, de facto states often have limited opportunities to engage with the outside world beyond the patron and the parent state. However, closer examination of one such de facto state, Abkhazia, reveals that de facto states can enjoy some bounded independent economic agency. Abkhazia’s maneuvering between Russia as “patron,” Georgia as “parent state,” and the wider international community (here exemplified by the EU) in the sphere of trade and economic interaction has important implications for de-facto state conflict transformation.