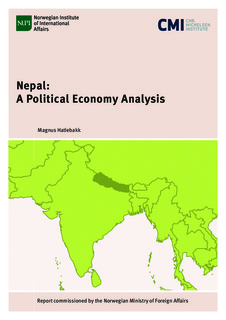 This report is an integrated political economy analysis of Nepal. The main finding is that economic growth and poverty reduction have been steady in Nepal since the mid-1980s independently of a number of political upheavals, including ten years of civil war. The growth has been driven by remittances and an upward pressure on wages in local labor markets. As a result, poverty has declined and social indicators have improved. Despite the availability of private capital and increases in wages for the poor, there is still a massive need for public investments in infrastructure, agriculture, health, and education. In the political domain the recent local elections will reintroduce local democracy after 20 years. Elected local politicians are expected to boost local development efforts. The leading political forces in Nepal are the political parties. There are close links between politicians and business leaders, the political parties control the trade-unions, have links to civil society organizations, and the parties select high-level government officials. The civil war and the post-war ethnic uprising led to demands for an ethnic based federal republic. A compromise federal map was decided in 2015, with provincial elections scheduled for the fall of 2017. There are concerns that the ethnic agenda may escalate ethnic conflicts, and it will be essential for all parties to work for participation of all social groups within the recently established local units, as well as in the economy at large.