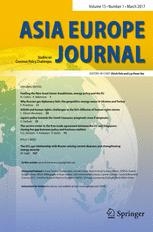 Diplomati  Utenrikspolitikk  FN  Asia
Summary:
This article argues that in the case of the EU’s efforts to undertake a “Pivot to Asia”, added explanatory salience can be achieved by recognising firstly the importance of the transatlantic factor and the US’ own rebalance policies. Secondly, based on a model where the USA is regarded as a significant variable in the EU-China relationship, one may more saliently discern the influence of Russia by assessing its impact on the triangular EU-China-US relationship, both directly and indirectly.