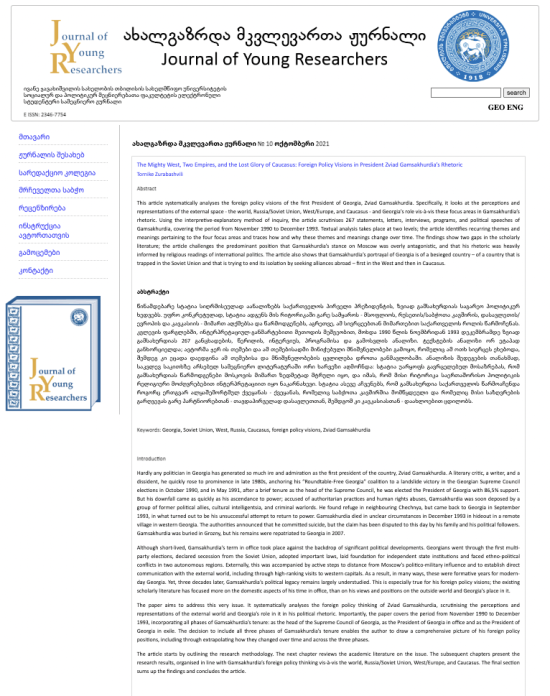 Utenrikspolitikk  Europa  Russland og Eurasia
Summary:
This article systematically analyses the foreign policy visions of the first President of Georgia, Zviad Gamsakhurdia. Specifically, it looks at the perceptions and representations of the external space - the world, Russia/Soviet Union, West/Europe, and Caucasus - and Georgia’s role vis-à-vis these focus areas in Gamsakhurdia’s rhetoric. Using the interpretive-explanatory method of inquiry, the article scrutinises 267 statements, letters, interviews, programs, and political speeches of Gamsakhurdia, covering the period from November 1990 to December 1993. Textual analysis takes place at two levels; the article identifies recurring themes and meanings pertaining to the four focus areas and traces how and why these themes and meanings change over time. The findings show two gaps in the scholarly literature; the article challenges the predominant position that Gamsakhurdia’s stance on Moscow was overly antagonistic, and that his rhetoric was heavily informed by religious readings of international politics. The article also shows that Gamsakhurdia’s portrayal of Georgia is of a besieged country – of a country that is trapped in the Soviet Union and that is trying to end its isolation by seeking alliances abroad – first in the West and then in Caucasus.