The Uses of Comparisons: A Critical Review of Approaches to Comparisons in Development Studies 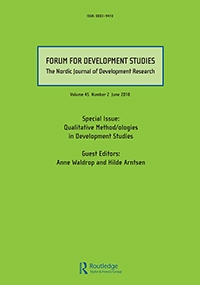