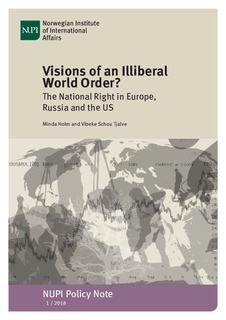 Visions of an Illiberal World Order? The National Right in Europe, Russia and the US

The rise of a national Right in both Europe and the US is disrupting the security agendas of Western foreign– and defense ministries. Long accustomed to directing the gaze and measures of Western security only outwards – towards Africa, the Middle East, China – these centers of policy formulation now find themselves forced to confront a more introspective line of questioning: Is the identity of ‘the liberal West’ and its agenda of a rule-based, institutionalized world order under threat from within? In this brief we unpack the visions of world order espoused by the new Western Right, its ideological overlap with conservative ideas in Putin’s Russia, as well as the built-in tensions and uncertainties of that emerging alliance. Our focus is on potential implications of these political developments for i) international institutionalism, and ii) interventionism. In short, we argue that anti-globalism must not be mistaken for anti-internationalism. The most basic political agenda of the national Right – from the Trumpian US to Putin’s Russia – is one of battling globalism and its liberal vision of a trans-national or cosmopolitan world order, by defending older Western concepts of sovereignty-centred, inter-national co-existence. In contrast to the extreme Right, the current European-US-Russian alliance of national Right politicians largely want to fight this battle from the inside and through, not outside, established institutions such as the UN and the EU.