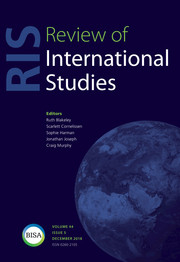 The symbolic structure of the international system, organised around sovereignty, is sustained by an institutional infrastructure that shapes how states seek sovereign agency. We investigate how the modern legal category of the state is an institutional expression of the idea of the state as a liberal person, dependent on a one-off recognition in establishing the sovereign state. We then discuss how this institutional rule co-exists with the on-going frustrated search for recognition in terms of socio-political registers. While the first set of rules establishes a protective shield against others, regardless of behaviour, the second set of rules specify rules for behaviour of statehood, which produces a distinct form of misrecognition. States are, at one level, already recognised as sovereign and are granted rights akin to individuals in liberal thought, and yet they are continually misrecognised in their quest to actualise the sovereign agency they associate with statehood. We draw on examples from two contemporary phenomena - fragile states, and assertions of non-interference and sovereignty from the populist right and non-Western great powers, to discuss the misrecognition processes embedded in the bifurcated symbolic structure of sovereignty, and its implications for debates about hierarchy and sovereignty in world affairs.